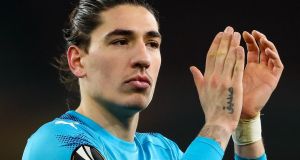 Hector Bellerín of Arsenal. The Spaniard was chased by Barcelona towards the end of last season and for much of the summer. Photograph: Getty Images

Héctor Bellerín is a prime summer transfer target for Juventus. The Arsenal right-back has come to question his career direction in north London, and the Serie A champions believe they can close a deal for him.

Arsenal have previously resisted attempts by other clubs to take the 22-year-old Spaniard. Manchester City and Barcelona have tried and failed, and Juventus had an opportunistic offer turned down on the final day of last summer’s window.

Juventus will push harder this time. They also made an inquiry for Bellerín in January, and they are laying the groundwork for a summer move. The Italian club, for whom a new right-back is a priority, know it will take at least £45 million to give Arsenal a decision to make.

Bellerín was chased by Barcelona towards the end of last season and for much of the summer. He had joined Arsenal from the Spanish side as a 16-year-old in 2011, and the appeal of a return was strong. Barcelona were willing to commit to a package of €70 million (£62.5m) for him. The fee was €45 million (£40.2m); the total wages €25 million (£22.3m). Arsenal said no. They simply would not sell.

The executive who drove the talks on Barcelona’s behalf was Raúl Sanllehí. He is now the head of player negotiations at Arsenal, having joined on February 1st, and, as such, he has seen the Bellerín situation from both sides. The bottom line is that Sanllehí knows the player wants a new challenge, having stagnated at the Emirates.

Bellerín was arguably the Premier League’s best right-back in November 2016, when he signed a new Arsenal contract worth £115,000 a week, which tied him down until June 2022. But, as the team have struggled, so has he.

Bellerín is conscious some of his former colleagues have blossomed since leaving Arsenal, particularly Alex Oxlade-Chamberlain, who moved to Liverpool last August. Sanllehí is broadly sympathetic to Bellerín’s wishes, although money is sure to talk most loudly.

Arsenal have not spent too lavishly in recent times despite a clutch of major outlays on individual players. Their net spend on permanent transfer deals since the summer of 2014 – across four seasons and eight windows – has been £163 million. They have generated funds through sales, and, as Bellerín is one of their more saleable assets, they face some deep thinking over him.