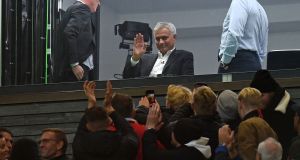 Arsenal have denied reports that they met with Jose Mourinho. Photograph: Getty Images

Arsenal have denied any meetings have taken place between their head of football, Raúl Sanllehi, and José Mourinho as pressure continues to mount on their head coach, Unai Emery.

The club have moved to quash widespread reports on Sunday morning that Sanllehi had met Mourinho for dinner, telling the English media that no such meeting took place, and that the pair have not spoken for years.

Mourinho was reportedly in attendance for Arsenal’s Europa League win over Vitória last month, fuelling speculation that the Portuguese could be in line to replace the under-fire Emery.

A section of home supporters have turned on the Spaniard following a run of two wins from their last nine Premier League games. Emery came in for criticism for his tactics again after the 1-1 home draw with Wolves on Saturday.

The Arsenal manager has suggested Pierre-Emerick Aubameyang could continue as captain, after the forward wore the armband against Wolves in the absence of Granit Xhaka. Emery opted to leave Xhaka out of the squad after the club captain swore at supporters who jeered him during last week’s draw with Crystal Palace.

“He could be,” he replied when asked if Aubameyang, who opened the scoring on Saturday could remain as captain beyond one game. “I think he can take that responsibility and today he did that. We will analyse the match first, and our situation for the next matches and decide.”

Wolves midfielder Ruben Neves felt the visitors should have left north London with all three points. “We should have won that game, I think we deserved it,” he told the club’s official website.

“You have to keep on working to do this step forward and start winning these kinds of games. When we play well and have these kinds of chances, we must win it. If one team deserved the win today, it was our team.”