Arsenal and Arsène Wenger left to rue all too familiar frailties 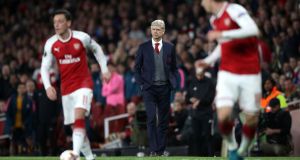 It is a lovely thought, Arsène Wenger burnishing his legacy by collecting the first European trophy of his career in Lyon next month, and for a while Arsenal’s manager could dream about that perfect send-off. Atlético Madrid were on the ropes, Diego Simeone was growling in the stands and for once it seemed that Wenger was not going to regret talking about a team with the potential to win the Europa League before this match.

Yet the awkward truth for Arsenal’s eternal optimist is that the best teams show no mercy when the odds are stacked so heavily in their favour. This was an occasion that ought to have been remembered for a thrilling Arsenal performance, Alexandre Lacazette’s deft header and one of the most raucous atmospheres in the Emirates Stadium’s short history. Instead, it will live in the memory because of the generous defending that allowed Antoine Griezmann to steal a potentially decisive away goal and expose the fragility that explains why Wenger is leaving.

This one could end up being even more painful than the Uefa Cup final defeat to Galatasaray in 2000 and the Champions League final defeat to Barcelona in 2006. Arsenal played against 10 men for 80 minutes and they could have killed the tie with sharper finishing and more maturity. Now, having burgled a 1-1 draw, Atlético will fancy their chances of reaching a fourth European final under Simeone.

Wenger’s insistence that Arsenal deserved better was a familiar lament and his players will have to do it the hard way in next week’s second leg at the Wanda Metropolitano, where Atlético are a formidable proposition.

It is not over yet, but a team without an away point in 2018 will need to produce a feat of tremendous defiance at one of Europe’s most intimidating venues.

Will Arsenal rise to the occasion? It is hard to trust them. Their big players cannot hide. They will need more incision from Mesut Özil and more poise from their forwards. They cannot afford any more laxity from Laurent Koscielny and Shkodran Mustafi. Diego Costa, an unused substitute here, must be champing at the bit.

There can be no more naivety. For while it is true that there was plenty to admire about the way Arsenal set about Atlético with ferocious intent in the early stages, it all felt a little too vague after Sime Vrsaljko’s red card for two rash fouls inside the first 10 minutes, with Wenger’s side guilty of not paying enough attention to detail in the key moments.

Arsenal fed off the crowd’s emotion in their first European semi-final since 2009, but the killer touch eluded them. Lacazette had missed two glorious opportunities before Vrsaljko’s dismissal and Wilshere and Danny Welbeck both fluffed their lines when in front of the goal.

Champions League finalists in 2014 and 2016, Atlético were there for the taking during the first 20 minutes, and Simeone’s mood was as dark as his outfit after seeing Clément Turpin dismiss Vrsaljko. When he erupted after Héctor Bellerín’s foul on Lucas Hernández in the 13th minute, the coach was sent from the touchline by the French referee.

Yet Atlético relish these rearguard actions and the longer the game stayed goalless, the more anxious Arsenal grew. The Spanish team crept forward and Griezmann fired two warning shots before half-time. Arsenal had to regain their composure and they finally found a crack in the yellow wall just after the hour, Lacazette heading Wilshere’s cross past Jan Oblak. But disaster was on the way.

“The task was clear for us,” Wenger said. “Not to be caught on the long ball.”

And still Arsenal were caught by one hopeful punt in the 82nd minute. Griezmann won the chase with Koscielny and although David Ospina blocked the striker’s first attempt, he converted the rebound when Mustafi, the £35m German defender, fell over.

The muted applause at the end spoke volumes.