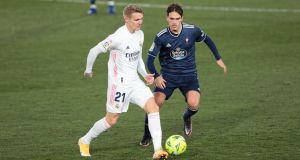 Arsenal have won the race to sign the Real Madrid midfielder Martin Ødegaard on loan, beating off competition from Real Sociedad and Ajax to secure the services of the 22-year-old attacking midfielder.

The two clubs have agreed the deal with Arsenal paying the player’s salary until the end of the season. Ødegaard will have a medical before completing the move and the Arsenal manager, Mikel Arteta, hopes to have him available for the game against Manchester United on Saturday.

Ødegaard had an outstanding season on loan at Real Sociedad in 2019-20 but was recalled early by Real Madrid, only to be used sparingly by Zinedine Zidane this campaign. He will now have a chance to get this season back on track and will be an excellent addition for Arsenal.

There is no option to buy included in the loan deal but the two clubs will discuss the best way forward after the Norwegian’s spell in north London has come to an end.

Ødegaard joined Real Madrid in 2015 aged 16 but has yet to establish himself as a first-team regular. He has made eight league appearances for Real and been loaned out to Heerenveen, Vitesse and Real Sociedad. He has 25 caps and one goal for Norway. – Guardian