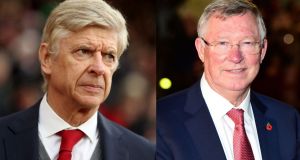 Arsene Wenger will equal Alex Ferguson’s record for most games as a Premier League manager when Arsenal take on Crystal Palace on Thursday. Photograph: Adam Davy/PA

The idealist in Arsène Wenger is never far from the surface. The Arsenal manager has reverted to a back four in recent matches – his default setting for so many years – and it has meant bad news for Sead Kolasinac, the summer signing from Schalke whom Wenger sees as a left wing-back and not a left-back.

Since the switch from a starting back three to a four at West Ham United on December 13th, Wenger has relegated Kolasinac to the bench for Premier League matches and brought in Ainsley Maitland-Niles on the left of the defence. “I think Kolasinac will play again and I gave him a breather, as well,” Wenger said. “He is highly suited for a wing-back role, for a more offensive role. He is working hard and I think he will play in a back four, as well.”

Wenger went to a back three after the disastrous 3-0 defeat at Crystal Palace on April 10th and it helped his team to finish the season strongly. But this time out – mainly on their travels – they have looked passive and predictable. In nine away league fixtures they have scored nine goals, and five of them came at Everton. “We didn’t score enough goals away from home, so that’s why [there was the switch in system],” Wenger said. “I felt that sometimes our game was a bit too lateral.”

It was put to Wenger that the back four was the formation of his heart. “In my heart I prefer to play with one defender,” he replied, with a smile.

Et voilà. Even Wenger cannot play with one defender, although given how high he positions his full-backs it could be argued that he is not far from doing so. But this was the Frenchman at his purest – the old romantic who prizes freedom of expression. Where is the joy in defending?

Wenger has reached his latest landmark. On Thursday night he returns to Selhurst Park to face Palace and it will be the 810th Premier League game of his career, equalling the record of Alex Ferguson, his former adversary at Manchester United.

The first thing to say is that top-level English football records do pre-date the inception of the Premier League. But Wenger’s longevity is remarkable and he puts it down to a number of factors, including dedication, sacrifice, luck, good health and having found a club that chimes with his values. The 68-year-old has remained true to himself and as he reflected a little whimsically on a journey that began with the 2-0 win at Blackburn Rovers in October 1996, he chose to highlight a guiding principle.

“The most important thing is to believe in human beings,” Wenger said. “When you are such a long time in the job, you’re not naive. You know all the strengths and weaknesses and how, sometimes, people can be selfish or mean. But you still have to believe that there is a light in every human being that you can get out.

“If you are paranoid, don’t chose this job. You have every reason to become more paranoid. But you must have that strength of belief in human beings that always takes over at difficult moments.

“People don’t want to know whether other clubs have more resources. They just want you to win. But your job is to take the best out of the potential of your team. The ultimate goal is to make people happy. Unfortunately you don’t always manage that but you try to do it.”

Wenger remembers his Arsenal debut at Ewood Park, where Ian Wright scored both of the goals, and it is fair to say he could not have imagined staying in situ for so long. “I would have said: ‘You’re absolutely mad, absolutely no chance,’” Wenger said. “Because every game is such a gamble. It’s Russian roulette every game so you think at some stage the trigger will hit you.

It’s still about values and the carrier of values is the manager.

“When we drove to Blackburn on the coach, I’d banned all the chocolate and I remember the players chanted: ‘We want our Mars bars.’” Wenger was asked what they chanted these days. “Now, they have their music,” he replied, pretending to put on a pair of headphones.

To the Frenchman the essence of the game has not changed; it is society and behaviour that have done. “We have gone to more individualism,” Wenger said. “We live in a society that is more demanding and opinionated. The problem in Europe is that the respect for basic things is less strong than it was 20 years ago – things like respect for each other. There is more suspicion. In every job people are questioned more. It means society is less stable.

“It’s still about values and the carrier of the values [at a football club] is the manager. If you have no stability, these values are questioned. Technical stability is important. Maybe the clubs today need to be stronger inside to resist that.”

Wenger preached his gospel of calm analysis. As much as anything, it is what has sustained him. “If we watch again the Palace game from last April, you will see it was not as bad as everybody said,” he argued. “Don’t get carried away by all the negativity. Try to analyse the game in the most objective way. Even when you win, it’s the same.”

3 Manager of the year awards 11