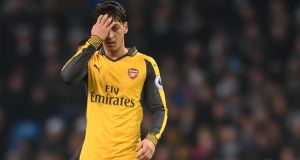 Arsène Wenger says that Mesut Özil is not a special case when it comes to the dirty work of pressing and winning the ball back. Arsenal’s luxury conductor was a focus for criticism with clips of him at a walking pace during last weekend’s defeat at Manchester City highlighted.

“I don’t give him any leeway when the team doesn’t have possession,” Wenger explained. “He has to do his job like everybody else and usually he does it well. Mesut Özil is an important player, a big player, and the big players always respond to criticism on the pitch. His main strength is of course when we have the ball and he suffers more when we don’t have it. At City, he suffered more than others because we didn’t have enough of the ball. Unfortunately, if you want to have the ball, you have to win it back.

“We have suffered a little bit physically in the last two games. We were twice 1-0 up and started the game well. I felt we have given a lot in Europe, in the Premier League. We were a bit less fresh mentally to absorb the pressure of two big away games having just come back from Europe.”

The post-match debrief was kept in-house, but Wenger pointed out that in general Özil scores highly in the statistics for winning the ball back in the final third of the pitch. He is equal second across the league, tied with Alexis Sánchez. The fact the two have similar efficiency in that regard might appear surprising given their contrasting styles, but Wenger insists Özil ’s demeanour is often misread.

“He is a guy who works much harder than people think and his body language goes a bit against him sometimes. We are a team who win the ball back high up the pitch very well, which means he and Alexis do their part of the job very well. We had a deficit in winning the ball back in the middle of the pitch at Manchester City.”

After two consecutive defeats at Everton and City, which damaged so much of the positivity Arsenal had generated, Wenger is urging his players to bounce back when West Brom visit the Emirates on St Stephen’s. “We are ready for a fight and we want to respond,” said Wenger. “I think everybody is focused to do that.”

Danny Welbeck and Aaron Ramsey returned to full training this week. Wenger is looking forward to welcoming them back into contention but will be cautious with both players having been out long term.

“Welbeck will need some time,” said Wenger. “Today is his first team training. Of course it’s fantastic, because for him it’s like starting a new career, because he has been out for such a long time. But I’m a bit cautious with the little setbacks you have when you have been out for a long time. You have to be patient.” Guardian Service

1 Worst sporting moment: White knuckle ride on a hate-filled night at Windsor
2 Arsenal complete signing of free agent Willian
3 Rugby to return in England with rucking but no hugging
4 Acute disillusionment the only response to growing FAI debacle
5 Bundini Brown: The man who invented ‘float like a butterfly, sting like a bee’
Real news has value SUBSCRIBE