Arsène Wenger made sure Arsenal exit was on his terms

List of possible replacements include Thomas Tuchel and Patrick Vieria 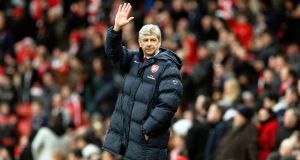 Arsène Wenger took the seismic decision to walk away from Arsenal on his own terms because he was mindful of the very real threat that he would be sacked at the end of the season.

The club’s majority shareholder, Stan Kroenke, and other directors had grown increasingly concerned by the team’s dismal Premier League performance and the huge number of supporters that have chosen to stay away from home matches in recent weeks.

The Guardian understands that club began a drive to cold-call Red Members of their supporter scheme on Wednesday to offer them season-tickets for next season in the face of record numbers of non-renewals from existing fans. Red Members are below Gold and Silver members in terms of priority.

Wenger had routinely said that he would fulfil the remaining year on his contract next time out but the wagons have circled for some time. The chief executive, Ivan Gazidis, has made a series of appointments on the technical side of the club, as part of his “catalyst for change” agenda – most notably those of the head of football relations, Raul Sanllehi, and the head of recruitment, Sven Mislintat. The impression has been that Gazidis was putting a succession plan into place while Wenger was still in the building.

Wenger has felt the pressure from board-room level, although there was still the sense of shock among the playing squad when he informed them before training on Friday morning that he would step down from what he has referred to as his life’s work at the end of the season.

The hope at the club is that the timing of the announcement will galvanise both players and fans for their shot at saving the season – in other words, the Europa League. They face Atlético Madrid in the semi-final – the first-leg is at the Emirates Stadium next Thursday – and were Wenger to win what would be a first European trophy, it would return the club to next season’s Champions League.

Moreover, the announcement offers Wenger the chance to enjoy a measure of goodwill from supporters over the final weeks of the season, even those that have hounded him relentlessly. Arsenal face West Ham United at home on Sunday. They lag sixth in the league, with virtually no chance of finishing in the Champions League places.

The focus will turn to the search for Wenger’s successor but one man who is not in the running is Thomas Tuchel. The former Borussia Dortmund manager, who left his post at the German club last May, has made a decision over his next career move and it is not Arsenal. Even if the club were to approach him now, it would be too late. It is believed that Tuchel is primed to replace Unai Emery at Paris Saint-Germain.

Arsenal have been linked with a raft of names, including Carlo Ancelotti, Luis Enrique, Leonardo Jardim, Max Allegri and Patrick Vieria.

Wenger won three Premier League titles and a record seven FA Cups in his near 22-year tenure. He said: “After careful consideration and following discussions with the club, I feel it is the right time for me to step down at the end of the season. I am grateful for having had the privilege to serve the club for so many memorable years.

“I managed the club with full commitment and integrity. I want to thank the staff, the players, the directors and the fans who make this club so special. I urge our fans to stand behind the team to finish on a high. To all the Arsenal lovers take care of the values of the club. My love and support for ever.”

Kroenke said: “This is one of the most difficult days we have ever had in all our years in sport. One of the main reasons we got involved with Arsenal was because of what Arsène has brought to the club on and off the pitch. His longevity and consistency over such a sustained period at the highest level of the game will never be matched.

“Arsène has unparalleled class and we will always be grateful to him. Everyone who loves Arsenal and everyone who loves football owes him a debt of gratitude. Three Premier League titles, including an entire season unbeaten, seven FA Cup triumphs and 20 successive years in the Champions League is an exceptional record. He has also transformed the identity of our club and of English football with his vision for how the game can be played.”