Arsène Wenger happy to have his philosophical match with Arsenal 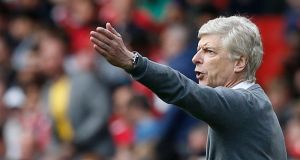 Arsène Wenger says his dedication to Arsenal’s values persuaded him to reject an offer from Manchester United in 2001 and continue his career at the north London club.

High-profile suitors have been many during Wenger’s 21-year tenure but a move to United, who were Arsenal’s primary rivals for the Premier League title during the early part of the century, would have caused shockwaves. That is what Martin Edwards, the United chairman at the time, sought to achieve after Alex Ferguson – in a decision he later reversed – announced that he would retire at the end of the 2001 02 season but Wenger opted to turn down a proposal that he admits was attractive.

“You should ask him,” Wenger said of Edwards after the latter claimed in his new autobiography that the pair met in London to discuss a move. “I am always very confidential. One day maybe I will get all the contacts I had during my stay at Arsenal and it would make a few chapters. You should ask Martin Edwards.”

Pressed on why he would turn down United, who were the reigning champions when Edwards made his approach, Wenger was more expansive and explained he saw no reason to leave a club whose philosophy matched his own.

“Because I love the values of this club and, for me, a club is about values first,” he said. “One day it would be a good chat to have with the press to look at the evolution. You speak about Manchester United, and the evolution in the last 20 years would be very interesting. A lot has changed but when I came here this club was about values that I love in sport. That is why I am still in the competition.

“So I always question myself. Yes, of course, Manchester United is attractive but am I happy here? The answer was yes.”

The last sentence resonates particularly at a period when the fault-lines around Arsenal are more pronounced than at any stage under Wenger. Saturday’s straightforward 3-0 win over Bournemouth went a small way towards salving the wounds inflicted by their crushing defeat at Liverpool on August 27th but, while the Emirates sounded content enough, there was little outward support for the manager.

Nor was there unequivocal backing for Alexis Sánchez on the forward’s 74th minute introduction, his first Arsenal appearance since a deadline day move to Manchester City broke down; Sánchez put in a bright enough cameo and Wenger said he had underlined his commitment in a training ground meeting after returning from international duty.

“He is focused,” Wenger said. “He told me he is focused on the Premier League and the Europa League. On top of that he had a bad result with Chile against Bolivia but he came back full of desire and ready to play.”

It is probably not a stretch to suggest that the re-integration of Sánchez, whether that extends merely to the January transfer window or through to the end of the season, may define this phase in Wenger’s stewardship but the noises from his dressing room are as positive as can be expected.

Petr Cech, who was extended by an insipid Bournemouth team only during the last 10 minutes, said he had held his own conversation with Sanchez and was encouraged by the attitudes shown by the forward and another player of uncertain future, Mesut Özil.

“I spoke with Alexis and he wants to win,” Cech said. “Some people say, ‘He does this, he does that.’ But I think he’s a guy who plays with all of his passion and all of his heart. You could see that in his performance. He came on and you could see he put a shift in. Mesut was outstanding as well . . . defensively, offensively, he put a huge amount of work into the game. That’s exactly what we expect and what we want.”

Wenger has not decided whether Sánchez will play from the start in Thursday’s Europa League match with Cologne, which precedes a visit to Chelsea on Sunday. It is possible he will again be kept in reserve, with the manager admitting that the Premier League takes priority between now and the end of the group stage. Guardian service