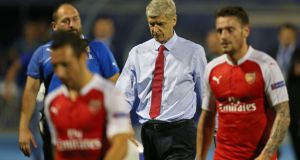 Despite a series of journalistic attempts to get Arsène Wenger to engage in an opinion on anything even vaguely to do with José Mourinho at the pre-match press conference, the Arsenal manager’s stance was clear.

For someone who normally speaks freely on any topic, the Chelsea manager was a non-starter. Nada. Zip. The history of mutual antipathy runs deep and when Wenger said he did not wish to comment on whether he would shake the Chelsea manager’s hand, his expression tightening, the tension this whole brouhaha provokes was palpable.

The irony was Wenger was so adamant not to inflame this story but this deliberate stance not to discuss it – so unusual for him – was revealing enough to set off a sort of simmering anyway. The assembled journalists were left attempting to analyse the deeper meaning of a cluster of no comments.

Do Mourinho’s digs have any effect?

But don’t they have an effect on you?

“No, because I just told you that what is important is football for me.”

What about not shaking hands at the Community Shield?

“I don’t want to talk about that.”

Will you shake hands tomorrow?

“I won’t tell you more than I just told you.”

Do you regret the touchline incident last season?

“I have nothing more to say about this situation.”

Is your relationship with José better?

“A special relationship is not my worry, all I worry about is our performance.”

Are Chelsea in decline?

“I don’t know, I leave that to the specialists. I take care of my team and my own problems.”

Wenger is no fan of these verbal spats and does not like to think they have too much real consequence.

“Realistically people come to watch football and all the rest is a little bit secondary,” he says. “What is important is the quality of what we will see at 12.45pm and you want people to focus on that. For us, it’s a big game and we know our position at the end of the season will depend on how well we do in the big games. I do not think too much about where Chelsea stand in the league at the moment. I focus more on us performing well.”

Wenger reflected positively on the impact of finally beating Chelsea in the Community Shield. “It can sometimes be a mental block for the players or the team when they do not win against certain teams. On that front it was good,” he says.

Although preparation has been far from ideal, with a late return from Zagreb exacerbated by the fact the local airport was closed and the team needed to travel two hours by coach to fly from neighbouring Slovenia, Wenger does not want any excuses. “I knew before the game in Zagreb that time would be short and took decisions linked with that.”

He is yet to decide on whether to pick Theo Walcott, with 11 goals from 11 starts, or Olivier Giroud, who is enduring a difficult time, up front, while Per Mertesacker is available again after an illness – although he may have some trouble displacing the excellent Gabriel.

Wenger confirmed Jack Wilshere will have surgery next week. “It is a blow, a big problem, but in the short-term only because it does not damage his future.”

The manager hopes the Petr Cech factor will have an influence on the opposition as Arsenal head to an assignment they have found so troublesome in recent years at Chelsea.

“You know you have to score the perfect goal in front of him,” said Wenger, who wonders whether the goalkeeper’s aura and the friendship he had with his former team-mates at Stamford Bridge can be have an effect on the Chelsea attack.

“I just want him to focus on this game and not be influenced by that. You can’t go there and wonder if you’re standing in the right goal or not. It is always difficult to go back to your club and play but fortunately he has handled that this season. That is why I decided to play him in the Community Shield. It is the first step that is important and he has dealt very well with it.” Guardian service