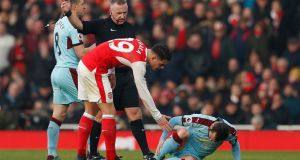 Arsenal’s Granit Xhaka attempts to help up Burnley’s Steven Defour after fouling him before being sent off by referee Jonathan Moss at the Emirates. Photograph: John Sibley/Livepic

Arsène Wenger has advised Granit Xhaka not to tackle after the Swiss midfielder was sent off for the second time this season against Burnley last weekend.

“I think he’s not naturally a great tackler,” said Wenger of a player Arsenal spent €29 million to acquire from Borussia Mönchengladbach in the summer.

“In his decision making I think he is quite intelligent on the pitch. But it’s more the way he tackles that is not really convincing. He doesn’t master well the technique. I would encourage him not to tackle, to stay on his feet. Tackling is a technique that you learn at a young age. You can improve it but when you are face-to-face with somebody, it’s better you stay up.

“You have to accept that he can be punished for these kinds of tackles now. He has to learn from that. Unfortunately we will lose him for four games in a very important period of the season. Hopefully we will get away with it.”

Xhaka has had a problematic few days, and has told his manager he did not use abusive words towards a member of staff at Heathrow airport.

“He denies it completely,” said Wenger. “I have talked with him about it and he completely denies what happened there.”

Wenger tried to play down the notion that Xhaka seems to be attracting problems. “I can only talk about him on what I’ve seen since the start. He’s had a fantastic attitude since he arrived here on a daily basis.”

It has not been the most straightforward few days with the repercussions of unseemly incidents rumbling on – not least concerning Wenger himself.

He has accepted the English Football Association’s misconduct charge for his reactions towards fourth official Anthony Taylor at the climax of the Burnley game and requested a personal hearing, which is expected to take place today, before Arsenal’s trip to Southampton.

Wenger does not dispute that he was guilty of poor behaviour.

“I have said what I think I have to say publicly – the rest will be a bit more discreet,” he said.

He plans to explain himself in the hope of minimising any punishment. If he is banned for a time considered reasonable he will take his medicine, but if he regards any punishment as excessive Arsenal will appeal.

“If I am punished, the only thing I can say is that when I was sent off I was surprised and I was in the tunnel because I thought I had the right to be in the tunnel. Last time I was sent off wrongly, in 2009, I had to go in the stand at Old Trafford and I didn’t know where to go. No one tells you what you have to do when you are sent off.”

He advocates more clarity on the guidelines for where a manager should go in the event of a dismissal.

“I’ve been in England for 20 years, I have seen a lot on the bench, as you certainly know. I’m big enough to know when I do well and when I do not do well. I have said much worse than what I did here and you are not punished and I have heard much worse from other people. I am a passionate guy and I believe that I am completely committed in my job and want to win football games, like all the managers.”

“I have certainly a tendency to be super-passionate. You do not make 34 years without interruption on the bench if not super-passionate, believe me. I put you in this job for six months and then we will talk again – if you are still alive.”

Wenger likes to feel close to the action and his team and admits he would not find it easy to handle a touchline ban.

“I prefer to be physically there with the team. The team is used to me being there – it’s not ideal conditions.”

Wenger was banned for one match in 2010 for patting Martin Atkinson on the back during a match against Sunderland.

1 TV View: Roy Keane but Daragh’s keener as Late Late fails to shoot the lights out
2 ‘Manchester United are lucky to have you’: Klopp responds to Donegal schoolboy’s letter
3 Ireland Slam England at the Gardens to open up Grand ambitions
4 Eddie Jones: back three will deal with Irish aerial threat
5 Andy Farrell finds a home from home
Real news has value SUBSCRIBE