United look bigger, stronger, quicker and more ruthless – but there is a long way to go 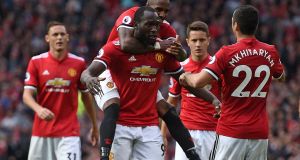 Nobody is such a master of the humdrum four-goal win as José Mourinho. When his sides start winning 4-0 and 4-1 and others start rolling their eyes, it’s a sure sign that things are going well. In claiming the league title in 2004-05, his Chelsea scored four goals in a game seven times. The victory against Everton on Sunday was the third time already this season that Manchester United have won a league game 4-0.

It’s the perfect Mourinho score, a brusque assertion of superiority rather than an artefact or a drama to be stored in the game’s collective memory forever.

It is, of course, early days yet. Everton should have been United’s first real test, but their start to the season has been so poor that it’s still impossible to know how Mourinho’s side will fare against the serious challengers. Not until they play Liverpool at Anfield on October 14th will there be any real gauge of how good this United are – and arguably then only if Jürgen Klopp gets his defence sorted.

But what is already true is that United are not struggling to dispatch smaller sides as they did last season, when they were crippled by 15 draws, 10 of them at home. There is a remorselessness and a ruthlessness about United now, an energy and a physical power. They are the tallest team in any of Europe’s top five leagues.

That nine of their 16 league goals have come in the final 10 minutes of games both suggests their stamina and accentuates the psychological dimension for opponents. It’s no good holding out against them for half an hour or an hour and hoping they get frustrated. Fall behind and come out against them and they will counter you into oblivion. They are relentless, pitiless, inexhaustible, a football boot stamping on the face of the rest of the league, or at least its smaller members, forever.

Romelu Lukaku already looks a wise investment. He’s scored five goals and registered an assist this season, as well as winning 3.2 of 7.8 aerial duels contested per 90 minutes (which is roughly comparable to Zlatan Ibrahimovic’s record of winning 3.1 of every 6.2 contested last season). There are still those who question his movement – Ian Wright was the latest former striker to express scepticism – and it may be that in tighter games that does become a significant issue, less for what it does to his capacity to score goals than for what it means for the structure of the team as a whole, but it may also be that he is less of a fixed point in those games.

For now, all that is certain is that Lukaku has given United a punch against weaker teams that they lacked last season. Mourinho, as he so often does in his second season, has found solutions to the problems identified in the first.

One issue that many identified as a problem last season, though, hasn’t changed. Last season, no side in the Premier League ran less than Manchester United, which was generally interpreted as a reflection of their occasional sluggishness and perhaps especially the lack of mobility of Zlatan Ibrahimovic. Yet this season they are averaging as a team 0.6km per game less than last season, more than only Swansea and West Ham, and there is no suggestion that they are labouring.

Given how meticulous Mourinho is, given how consistently he has made improvements between his first and second seasons at a club, the only conclusion can be that he never regarded that as an issue – and results so far would seem to back him up. High distance run stats can indicate one of two things: either a side that plays a hard pressing game (which is why Tottenham are second in the list) or a team who have spent a lot of time chasing after the ball (which is why Bournemouth are top and averaging more than 20km per game more this season than last).

Mourinho’s sides, though, are discerning in when they press. They tend to sit deep, even against lesser sides, far deeper than is fashionable. His teams have always been at their best when they have space in front of them, which is why pace in forward areas and drive from midfield are so important to him. There has been criticism from those who played for him both at Real Madrid and in his second spell at Chelsea for a lack of coordinated attacking practice, particularly against massed defences and that, perhaps, is his one tactical weakness. He seems to prefer, counterintuitively for such a controlling figure, to sort out the defence and then allow his forwards to improvise – which is perhaps why his greatest successes have come with those clubs who could portray themselves as outsiders.

But this season only Stoke have resisted them. There will be sterner tests ahead, but if United are cuffing aside non-challengers, then they don’t have to attack those clubs who are challengers. They can sit back, kill the game, take the draw if necessary, and hope their counter-attacking prowess pinches a win. That’s why the best Mourinho sides have been front-runners: get ahead, make the opposition attack and use that against them. The 4-0s may feel unremarkable, but they are symptomatic of a team in very good health.