Antonio Rüdiger says racism has won after boos at Spurs 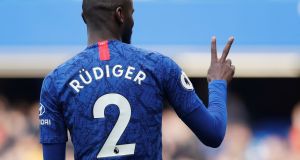 Antonio Rudiger: “It’s sad,” Rüdiger said. “I don’t know why they would [boo me]. Maybe it’s because I voiced about the racism. If you boo me because of that then you are poor people.” Photograph: David Klein

Antonio Rüdiger has said racism won when no one was punished for allegedly racially abusing him at Tottenham in December and the Chelsea defender has hit out at the Spurs fans who booed him at Stamford Bridge on Saturday, calling them “poor people”.

Rüdiger appeared to indicate he had been targeted by a monkey chant during Chelsea’s 2-0 away win two months ago, only for Spurs and the Metropolitan Police to find no evidence to support his complaint, and he believes speaking up has made him a bigger target.

Some Spurs fans have accused the German centre back of lying and he was greeted with jeers from the away end as fourth-placed Chelsea moved four points clear of José Mourinho’s side after a 2-1 home win.

“I am sorry. This is a sign that we have a very big problem. At the end of the day I am alone in this case because I am the one who has to swallow this,” said the German international. “With the win it makes me feel a bit like, yes okay, but it makes me feel like it will always be like this. For me, in this case, racism won.”

While Rüdiger did not blame Spurs or the police for closing their investigation last month he said the outcome is not a surprise. He questioned why no one in the crowd came forward with information and pointed out that a Chelsea supporter was arrested during the same game after being reported by fellow fans for allegedly racially abusing the Spurs forward, Son Heung-min.

“I’m very careful with this,” Rüdiger said. “I’m not in the investigations. I’m not a police officer. I just hope always people do their job right. But nothing happened and, to be honest, it was not a surprise. They always get away with it. Not always, sometimes they get punished but mostly they get away with it.

“The support from my club was there. Also players and everything. For me this was not enough. These people need to be punished. They need educating. We all, even you, failed in this.

“If people are really honest we have so many people coming into the stadium and in that game when it happened against me, Chelsea fans got arrested. And why? Because Chelsea fans reported the fan who abused Son. On the other side, nothing happened. It’s the people who were around. That’s why I say if we don’t stand up racism won.”

Racism has blighted English football in recent times and Rüdiger, who was speaking to four white journalists, spoke about the isolation black players feel when they are abused. He questioned whether the authorities are doing enough to tackle the problem and argued that walking off the pitch will have no effect.

“I’m not trying to offend but you people will never understand what goes through my mind in this moment” he said. “Or other black players’ minds. I am alone. I am totally alone. It’s nice if people are speaking up for me but at the end of the day it just replays. Authority-wise I’m alone.

“Walking off the pitch doesn’t make sense if they still don’t get punished. Does it make sense to walk off the pitch? I don’t think so. The consequence may be I am again the booed man. What point is it no one gets punished? At the end, how people write stuff, I will be the bogeyman again. If there is no punishment for these people racism won.”

Rüdiger pointed out what happened when Porto’s Moussa Marega tried to leave the pitch after being allegedly racially abused during his side’s 2-1 win over Vitória de Guimarães last week.

“It was clear everyone heard it,” he said. “And his own team-mates held him back to stay on the pitch. He was alone. And he was booked for going out because he was racially abused. It’s simple, we are alone in this. We have to deal with it in our way.”

For all his anger, Rüdiger said he will not shy away from speaking up. He became a father last Thursday and wants to provide a good example for his son, Djamal.

“I will always stand up,” he said. “It’s not only about myself. It can be homophobic or something like that. It’s about standing up for people.

“If it happens at football it is also happening outside and outside my son is going to be growing up. I will do my best to make sure my son is not stupid like other people. Sorry for this word. I don’t have any other words for this.” – Guardian