Antonio Conte: Kanté has become a top player at Chelsea 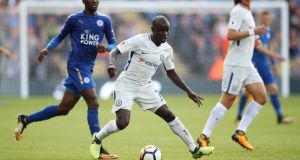 Midway through the first half Wilfred Ndidi launched a counter-attack. After winning possession deep in his own half he scooted forward. When confronted by N’Golo Kanté, he knocked the ball past the Frenchman and dashed to retrieve it on the other side – nice try but no one does that to Kanté.

The Chelsea player beat Ndidi to the ball and held him off before passing to a team-mate. The young Nigerian was bought by Leicester after Kanté went to Chelsea a year ago, has done a decent job of replacing him and is getting better all the time. But Kanté is still ahead of the 20-year-old. And he, too, is improving.

The most obvious demonstration of Kanté’s progression came five minutes into the second half when he struck what turned out to be the winning goal, receiving the ball 30 yards out and lashing a low shot into the bottom corner.

It was not the most ferocious shot ever seen – Ndidi, in fact, tends to be more dangerous from long range – and Craig Shakespeare intimated afterwards that Leicester’s players were slow to close down Kanté because they did not expect their former team-mate to open fire. The fact that Kanté did so reflected his increased confidence in possession and the encouragement he has been given.

“He played a fantastic game. He scored but overall he made a lot of good runs,” said Antonio Conte. “Before, a lot of people told me, ‘Yes, without the ball he has good stamina and is a good worker,’ but now with the ball he has improved a lot. I am happy for this because we are working a lot with him. Now I think he is a top player.”

Kanté, of course, was voted the Premier League’s player of last season. The two previous recipients of that award – Eden Hazard and Riyad Mahrez – lost form in the season after their accolades but Kanté looks unlikely to make that mistake. “This season he is confirming,” the Chelsea manager added.

With Kanté contributing even more to attack, Chelsea’s deepest midfielder tends to be his recently arrived compatriot, Tiémoué Bakayoko. The £39.7 million summer recruit from Monaco occasionally makes dangerous bursts forward but is confined mostly to patrol duty. The restriction is temporary.

“Don’t forget he is only 23 years old,” says Conte. “He is also trying to adapt to our idea of football. He has great quality. He is very strong without the ball and now I think he can improve a lot with the ball in the same way that N’Golo has done.”

With Bakayoko impressing, Álvaro Morata scoring freely, Antonio Rüdiger looking comfortable at the back and Davide Zappacosta performing well after being sprung from the bench where he had been sitting with Danny Drinkwater, Chelsea can be satisfied with how their summer signings have looked.

But the test is about to get tougher as they begin their Champions League campaign on Tuesday when Qarabag, the Azerbaijan champions, visit Stamford Bridge. “Last year we had long weeks to get ready for our Premier League games at the weekend; this season will be different,” says Hazard.

“But as a player you want to be in the Champions League. I just reached the semi-final with Chelsea, when we lost to Atlético Madrid, so it’s in my head to win this trophy. I have won the Premier League, I have won the title in France, I have won cups but big players always want to win the Champions League. I think now it is time to win this. We have a good squad, we have a good manager, so we are ready for it.” Guardian service