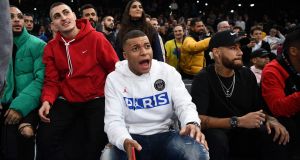 “It’s a pity he’s slowing down. First three goals, then two. I hope that it won’t only be one next time.” - Borussia Dortmund goalkeeper Roman Burki ruing the deteriorating form of team-mate Erling Haaland who only scored twice against Cologne on Friday, having got a hat-trick on his debut.

57: That’s how many minutes Erling Haaland has played so far for Borussia Dortmund, scoring just the five goals. That’s one every 11.4 minutes. Decent.

Most peeved fans of the week

We’ll go with the Chelsea faithful who have been clinging to the hope that the club will splurge in the January transfer window, now that their ban has been lifted, and are possibly spending the bulk of their days checking the club’s Twitter account in the hope that there’s some good news on that front.

So…. finally! “@ChelseaFC: You wait 24 days for a signing and then Three come along at once!”

Cue mass celebrations, followed by the realisation that club was simply announcing that the new signing was mobile phone network Three. The responses were almost as rude as the ones from Crewe Alexandra fans two years ago when the club tweeted: “Afternoon #CreweAlex fans... Some major January Transfer news coming up very shortly.... Guess Who?!?” The big news? George Cooper, their best player, had left for Peterborough. The responses? Guess.

“When I go outside, a crazy crowd forms. I can’t even go to the supermarket anymore. If I forget to buy Gruyère, I can’t go to Carrefour to buy it. They’d have to close it just so I could buy Gruyère. I can’t be just anyone anymore.” - PSG’s Kylian Mbappe on fame getting in the way of his cheese-buying.

“You’re at home and you’re bored, so you take a little walk outside. You go to have a little ice cream. Before I’ve even had a chance to lick it, there are already 500 people around me.” - PSG’s Kylian Mbappe on fame getting in the way of his ice cream-eating.

“You know already before you ask, that’s a shit question. Yet you still ask.”

- Jurgen Klopp on being asked if his Liverpool team are ‘The Inevitables’.

Staying stress free during the match

No offence at all to the good people at Oxford University and the research they published last week, but their conclusion that “devoted football fans experience such intense levels of physical stress while watching their team they could be putting themselves at risk of a heart attack” wasn’t entirely a revelation, it being common knowledge among devoted football fans since Methuselah was a boy.

In response to this finding, The British Psychological Society’s Dr Desmond McEwan has called on football clubs to make an effort to “keep their fans stress free”. We assumed he meant that they should produce teams that actually win games, but no.

“They could release a few emotion regulating, breathing and informative biofeedback techniques in videos on their social media channels encouraging their supporters to take super short breaks during a match; utilising a 30 - 60 second mental ‘zone out’ technique to focus on taking a few deep breaths”.

Manchester United should have tried that for their fans when they went 2-0 down to Burnley after the players had a 90 minute zone out.

It seems but a wet week ago that Dennis Wise captained Chelsea to victory over Aston Villa in the FA Cup final and paraded the pitch afterwards with his exceptionally cute five and a half month old son Henry in his arms.

Last Thursday? Henry (20) made his debut for Watford.

The wet weeks are flying by.

“I cannot take credit for Ronaldo’s current form, you can only give credit to his mother for creating such a specimen.” - Juventus coach Maurizio Sarri gives credit where it’s due for the wonder that is Cristiano.

“We have a really big team bus that we will drive over in. Maybe we will just put it in the box - or three buses next to each other. Maybe we can stop him, maybe we can’t.” - Cologne coach Markus Gisdol on his plans for dealing with Borussia Dortmund’s Erling Haaland in Friday’s game. Two Haaland goals later and he might have rued not using those three buses.

“I had to ask exactly how many points clear we are, that’s the truth.” - Even Jurgen Klopp is losing count.

It might be fair to say that football agents aren’t widely loved, their standing in clubs and fans’ affections not exactly rising when we learnt that they had been paid €600 million for their ‘work’ on international transfers in 2019, a rise of 20 per cent on the previous year.

Fifa, of course, has been under pressure to do something about the amount of loot being drained from the game by these fees, so they’re currently considering turning a bunch of proposals in to actual regulations, the main one being a cap on the cut an agent can receive from a transfer fee.

The Association of Football Agents, need it be said, are not happy with these proposals, so they met in London last week to discuss them. One of the attendees was the super mega agent himself, Mino Raiola, who was confident Fifa would back down. Why? “Because injustice always loses. If you look at the history of the Second World War and the First World War and all the other wars that were fought for freedom and liberty and all these kinds of things, then justice always wins so we will win.”

He’s good for a laugh, is Mino.