Alexis Sánchez to start against Chelsea despite Man City bid 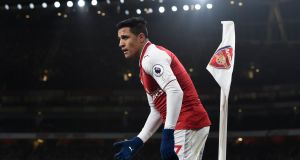 Arsène Wenger will name Alexis Sánchez in his starting Arsenal lineup for Wednesday night’s Carabao Cup semi-final first leg at Chelsea, despite the uncertainly over the forward’s future after Manchester City made a £20 million (€22.6m) offer to sign him during the January transfer window.

Wenger has been rocked by the loss of Mesut Özil to an unspecified injury and the midfielder has joined Laurent Koscielny, Nacho Monreal, Sead Kolasinac, Aaron Ramsey and Olivier Giroud on the casualty list for Stamford Bridge. Wenger is particularly stretched in defence and he will include the new signing Konstantinos Mavropanos among his substitutes. The 20-year-old centre-half arrived last week from PAS Giannina in Greece and Wenger’s plan was to loan him out. “He’s not ready to play for us,” the manager said last Wednesday. “We’ll give him out on loan.”

David Ospina will start against Chelsea, in place of the first-choice goalkeeper, Petr Cech, but Wenger will otherwise pick his strongest available team, including Sánchez.

City have wanted Sánchez since the summer, when they made an attempt to sign him, and, with the 29-year-old running down his Arsenal contract, they have been confident of signing him as a Bosman free agent at the end of the season. Pep Guardiola will be without Gabriel Jesus for two months because of a medial collateral ligament injury and this has increased the City manager’s desire to sign Sánchez now. City have opened talks with Arsenal and have indicated a willingness to pay £20m.

Sánchez, who played under Guardiola at Barcelona, is now permitted to discuss terms with overseas clubs, with Paris Saint-Germain and Bayern Munich believed to have shown an interest. But City remain the frontrunners for his signature. A contract worth £13m (€14.7m) a season until 2023 – or £250,000 (€280,000) a week – is understood to have been offered to Sánchez’s representatives. Wenger was asked whether he expected Sánchez to stay at Arsenal in January. “I expect nothing,” he said.

City agreed a deal for Sánchez last August worth £55m (€62.2m) plus £5m (€5.6m) in add-ons only for it to collapse when Arsenal failed to sign Monaco’s Thomas Lemar as a replacement. Arsenal had offered £92m (€104m) for him, which was accepted by Monaco, but there was insufficient time for the player to agree to the move.

Arsenal would rekindle their interest in Lemar if Sánchez left now. The Monaco manager, Leonardo Jardim, said earlier this week the versatile 22-year-old could be on his way this month, although Arsenal are also believed to be interested in Leicester’s Riyad Mahrez and Cristian Pavón of Boca Juniors. “We are not used to selling in the winter,” Jardim said. “But the transfer window lasts until the end of the month and many things can happen.”

Wenger is expected to move out Francis Coquelin this month, with Valencia, Crystal Palace and West Ham United having been linked to the midfielder. Coquelin is fit and he trained on Tuesday but he is not expected to be involved at Chelsea.

1 Gerry Thornley: Stoppage could tip balance in favour of big money teams
2 Increase in membership a plus for adapting golf clubs
3 FAI council member raises concerns about governance of organisation
4 Royal Portrush: Golf clubs ‘in real distress’ as eyes turn to 2021
5 Colin Kaepernick’s exile is too fresh for NFL to speak out on US protests
Real news has value SUBSCRIBE