Alexis Sánchez steals the show for Arsenal against Hull 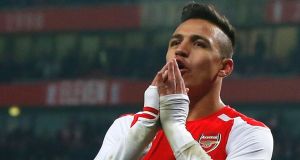 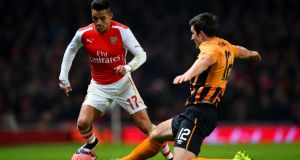 Alexis Sanchez of Arsenal is tackled by Harry Maguire of Hull City during the FA Cup third round match at Emirates Stadium. Photograph: Paul Gilham/Getty Images 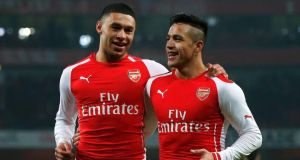 When his number finally went up, the Emirates Stadium rose as one. There were 84 minutes on the clock when Alexis Sánchez was permitted the rare luxury of a short breather, but by then the Arsenal striker had done his damage. As he walked past Arsène Wenger, the Arsenal manager offered him a casual handshake. He ought to have bear-hugged him.

Sánchez set up the first goal and he scored the second late on, a sharp spin on the edge of the area and trademark curled finish for his 16th goal of the season, as Arsenal made a solid start to the defence of the FA Cup they won against Hull City last May. But it has come to the point where his excellence is standard. Time and again he has made the difference since his arrival from Barcelona last summer. Where would Arsenal be without him?

Hull wanted revenge for their dramatic cup final defeat, but on a third-round weekend of few shocks there was little to see here, apart from Sánchez’s virtuoso performance. They were second best in all areas and it was difficult to remember a moment when they quickened the pulse.

The tie had been framed by the memories of the cup final, although supporters had to look hard for any traces of the Wembley starting line-ups. Arsenal had two survivors – Per Mertesacker and Santi Cazorla – to Hull’s three, who were Curtis Davies, Tom Huddlestone and Stephen Quinn.

Mertesacker made the early impression – together, of course, with Sánchez, who has come to feel like Arsenal’s bionic man. Wenger says that he wants to rest Sánchez and this fixture had felt like the ideal opportunity. But with all of his recognised centre-forwards unavailable, Wenger stuck with the Chilean, who has now started in 27 of the club’s 30 matches this season. He has also played in six long-distance friendlies for his country.

Mertesacker is in similar territory in the stamina stakes. This was his 27th start of Arsenal’s season and he marked it with his first goal since the FA Cup semi-final victory over Wigan Athletic last April. He rose powerfully behind Davies to head down and in from Sánchez’s corner.

Sánchez simply does not stop. It was easy to imagine him heading home after this for a kick-around in his back garden and, as Arsenal took a grip on the first-half, he was at the heart of almost everything.

He released Joel Campbell in the early stages – the Costa Rican should have done better than to shoot too close to Steve Harper, who blocked – while Sánchez floated one effort onto the top of the net and, after skipping around Harper, saw another cleared off the line by Paul McShane. Harper also kept out Nacho Monreal’s deflected header in the 24th minute.

Hull will never forget their Wembley appearance, and how close they came to winning the first major trophy of the club’s 111-year history. But when Steve Bruce made ten changes to the team that had beaten Everton in the Premier League on New Year’s Day, it seemed to indicate where his priorities lay. Hull sit two points above the relegation cut-off. Survival is everything to them.

The visitors could feel aggrieved that the Arsenal midfielder, Francis Coquelin, avoided censure for a horrible tackle on Quinn in the 11th minute; it was late and, when his studs sank in, the Hull player’s lower leg bowed alarmingly. Fortunately, Quinn was able to continue. Coquelin was eventually booked in the closing stages, having jumped in from the side on Harry Maguire with two feet off the ground.

It was a big day for Theo Walcott, who started his first game in exactly a year since his cruciate knee ligament rupture in the third round of last season’s FA Cup against Tottenham Hotspur.

He was understandably rusty, shooting straight at Harper in the first-half from Cazorla’s chip and blowing a glorious chance in the second period. From another Cazorla pass, he took a fine first touch but, with Harper advancing, a bad second one, nudging well wide of the far post with the outside of his boot. At least his movement was sharp.

Bruce swapped both of his strikers in the second-half and the longer it went on, the more he hoped for a break that might have proved decisive. But the cold truth was that his team failed to extend the stand-in Arsenal goalkeeper, David Ospina. They never looked like scoring. This was a tie that belonged to Sánchez.