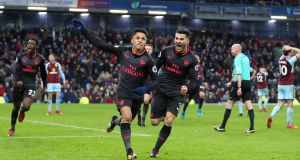 Burnley suffered heartbreak right at the end when James Tarkowski came together with Aaron Ramsey in the area and Lee Mason, the referee, gave a penalty. Alexis Sánchez slid home, to Nick Pope’s right, seconds later Mason blew for time and boos rented the Lancashire air.

A disappointed Sean Dyche strode off but was still able to applaud the home support. And the Clarets’ first-half display had been so impressive that Arsenal could not have complained if they were motoring back to north London following defeat.

The Gunners, though, did display steely character to come back into the contest following the break. After they arrived at Turf Moor just 52 minutes before kick-off, Arsène Wenger sent out a different XI to the losing one at Cologne on Thursday. The chief exclusion was Mesut Özil, though this was due to illness. Dyche made no changes from the 2-0 win over Swansea City and will have been pleased with the scintillating opening 45 minutes his team produced.

First, Johann Berg Gudmundsson forced Ramsey to concede a free-kick. When Robbie Brady’s delivery to Petr Cech’s left post area was repelled, moments later the Icelander intervened again. This time some Gudmundsson trickery bought a yard and he crossed towards the lurking Ashley Barnes. Arsenal once more cleared but it seemed obvious Dyche had instructed his men to get at the visitors via the long ball.

In a flash, though, Burnley came close to going behind. The thus-far muted Alexandre Lacazette broke, flipped the ball in to Ramsey, and he should have beaten Pope.

This was now a senses-tingling spectacle. What impressed about Dyche’s men was the speed of pass and movement. Yet Arsenal – and Sánchez, in particular – pinned Burnley back when the second period started. After the Chilean put in Sead Kolasinac deep in Burnley’s area it was the Clarets’ turn to scramble clear. It pointed to how Arsenal were edging the half but had to stay alert.

Following the introduction of Jack Wilshere for Alex Iwobi on 66 minutes, Brady crashed a shot back off Laurent Koscielny and the sense was the game could go either way.

At the close, it was Arsenal who triumphed and they now re-enter the top four. But Dyche and his players can be proud of how they performed.