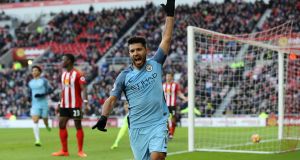 Manchester City’s Sergio Aguero celebrates scoring his side’s first goal of the game during their win over Sunderland at the Stadium of Light. Photo: Owen Humphreys/PA

At half-time a flock of seagulls swooped in from the sky, weaving intricate patterns as they flew just above the pitch, presumably hunting afternoon snacks.

Unfortunately for Sunderland, Manchester City proved similarly mercurial and elusive – not to mention hungry – on an afternoon when David Silva and friends left David Moyes’s players chasing shadows and accomplished finishes from Sergio Agüero and Leroy Sané pushed them closer to the Championship.

While the Wearsiders remain bottom, six points shy of 17th-placed Crystal Palace, Pep Guardiola’s team moved up to third, eight points behind the leaders, Chelsea. Although their title chances are almost certainly now purely mathematical, midwinter fears that they could end the campaign outside the top four appear well assuaged.

Indeed Moyes recently travelled to Manchester for City’s 5-3 Champions League thriller against Monaco and was so impressed with Guardiola’s side that he reported it was like “watching a finely tuned orchestra.”

The Scot readily concedes his own team – and club – are currently “gasping for air” and necessarily somewhat less polished but Sunderland started promisingly enough here. In full on streetwise, spoiling mode, they closed City shirts down at every opportunity with Didier Ndong making a fine job of, at times, pressing a slightly affronted looking Yaya Touré into submission.

Fabio Borini succeeded in winding Aleksandar Kolarov courtesy of a 20-yard shot which hit the defender in the midriff and then Jermain Defoe struck a post. Sensing opportunity 25 yards out, the former England striker swivelled sharply before anyone could shut him down and unleashed a dipping, first-time shot which bounced in front of a wrong-footed Willy Caballero before hitting the base of the upright.

Borini might have rewarded his team-mates’ impressive intensity, but headed the rebound wide. Yet despite all this commendable effort and despite their relative success in reducing City to scrappiness, Sunderland were far too slapdash, consistently forfeiting possession much too cheaply.

Although Jordan Pickford – Sunderland’s much coveted young goalkeeper and a player who may very well interest Guardiola in the summer – had surprisingly little to do in the first half he enjoyed a considerable reprieve when Sané gave Billy Jones the slip only for the youngster to overhit his subsequent cross. It left Silva unattended, and waiting for what seemed a simple tap-in disbelieving but such disappointment did not endure for long.

Before half time Touré had switched into dynamic mode, mopping up a poor clearance from Caballero – whose kicking was not that great throughout – and powering up-field before setting Raheem Sterling up for a run and low cross. Having taken a slight deflection that centre was dinked adroitly beyond Pickford by Agüero with Lamine Koné, the closest defender, thoroughly confounded.

That most subtle flick of Agüero’s boot City’s was first shot on target and represented a crunching blow in the solar plexus for Moyes who, until then, must have been cautiously satisfied about Jones’s overlapping success against Gaël Clichy and would have been heartened to see the right-back twice come close to scoring from corners.

It could though have been worse for Sunderland’s manager as Silva believed he had put the visitors two up before the interval only to see his ’goal’ disallowed for an offside against Sterling.

Early in the second half Pickford showed off his enviable reflexes, saving well from Silva but, undeterred, Guardiola’s captain simply manoeuvred himself into space, met a through ball, changed pace and advanced rapidly before playing in Sané.

Displaying thrillingly coruscating pace, Sané proceeded to burn off Jones – who had, otherwise, played so well he did not deserve to be the man humiliated – before beating Pickford with a shot which went in off the inside of the far post. Team-mates rightly rushed to congratulate him but on a day when his dribbles helped undo Sunderland, Silva’s role should not be underestimated.

Immediately, home fans rose from their seats and began streaming towards the exits as their City counterparts serenaded Guardiola but at least Moyes’s players refused to accept it was quite all over. Accordingly Caballero found himself denying Seb Larsson and Koné goals before watching Adnan Januzaj headed fractionally wide.

City had not exactly excelled in defending dead balls and Defoe thought he had capitalised after heading in a corner only to see it ruled out for offside. Even if it had stood it would have been a mere academic footnote at the end of a game in which Pickford further enhanced his burgeoning reputation with a brilliant save from Agüero which had Guardiola sitting up and looking extremely interested.

For Sunderland’s goalkeeper the future is bright – but right now not many others at the redundancy-hit Stadium of Light have too much to look forward to.