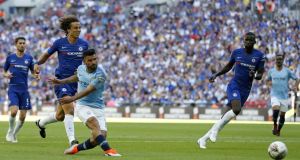 Given that this is the shortest break between the World Cup final and English football’s traditional curtain raiser since 1966 – a mere three weeks – this should have felt unfeasibly early to be feeling remotely ready for the resumption of domestic tussles. The extent that it did depended entirely on the shade of blue. Manchester City, defending champions, kicked off, and immediately began passing the ball around in the August heatwave with cool precision and dominant intent.

The slickness in City’s movement, the crispness of their passing, the all-round authority, was ominously impressive for any of the teams hoping to make up ground on a group that reached a century of points last term.

A week to go until they resume Premier League hostilities with an away match at Arsenal, they show no obvious signs of a hangover or a drift taking hold, and harbour few concerns about imperfect summer preparations with so many players having been involved at the World Cup.

In fact they flexed their strength in depth in that they were able to pick up the tempo, regain that familiar sense of control, with a handful of important players not involved at all. Kevin de Bruyne, for example, was back in the fold but only in the shape for a watching brief as he sat in the boiling sun alongside the subs.

City are seeking to become the first Premier League team to retain the title for a decade and they mean business. The manager has abundant experience of serial-winning at Barcelona and Bayern Munich and hunger is, Guardiola insists, the key to it all. How much do you want it, training session after training session, day after day, season after season?

There was a hint of an answer in the 39th minute when the ball went out of play in innocuous circumstances near the halfway line and in an instant the majority of City’s players, and manager, were vehemently appealing for the decision to go their way. The arms shot up. The eyes bore in on the officials. Leading 1-0 in a showpiece friendly, not exactly the most dangerous of situations on the pitch, they were fired up about details.

At the end of it all, with a comfortable 2-0 win courtesy of goals from Sergio Agüero, City’s players climbed the Wembley steps to collect the shield from a cheerful Mike Summerbee. Down on the pitch Guardiola and his staff watched on with an air of genuine delight.

In the spirit that winning breeds winning, the vibes were about not just continuing, but pushing on, from last season’s record-breaking season. You get the impression anyone minded to take their foot off the pedal will not be tolerated by manager or teammates.

Psyched for the new campaign? Chelsea looked a few beats behind as City crafted five attempts on goal in the opening quarter of an hour, and that included an opening goal. It was made by the accomplished Phil Foden, the golden boy who is pushing hard for a more regular role. He glided through from central midfield and dinked the ball to Agüero, whose neat control allowed him to slide an angled shot through Antonio Rüdiger’s legs and into the far corner of the net.

By then Riyad Mahrez and Leroy Sané had already taken shots. Bernardo Silva had jinked into a promising position and prised opened Chelsea’s defence with ease. Agüero had dragged an opportunity wide. Guardiola stared on intensely from his technical area, looking as driven as ever. Over on the Chelsea bench Maurizio Sarri looked desperate for a cigarette.

This was not an easy platform for Sarri to wave a magic wand. They certainly seemed to miss the presence of their best missing players more than City did. The N’Golo Kanté-shaped hole in their midfield was sizeable, and made it difficult for them to perform with much coherence. The Brazilian Jorginho, who plumped for Chelsea instead of City, knows he has a different kind of job on his hands slotting into one team rather than the other. Eden Hazard was an obvious miss in terms of cutting edge.

Chelsea’s most promising feature was that Claudio Bravo kept goal for City in a particularly bewildering style. Three times in the first half he fluffed when the ball was in his vicinity. First he clawed recklessly at Cesc Fàbregas’s lofted free-kick. He was less assured the next time he was tested as Callum Hudson-Odoi’s crack took him by surprise and bounced off him awkwardly. Then he froze completely when Marcos Alonso’s arcing shot looped over his head.

Agüero threatened to inflict more damage after the break. He brushed the side netting when Foden again was on hand with an inventive assist. Then Agüero returned the favour to tee up the youngster whose shot was underpowered.

City’s second came with another of those thrusting breaks from back to front, as they picked up possession and ran with it. Bernardo’s pass for Agüero was perfect, and the Argentinian finished instinctively.

The scoreline could have been more emphatic. Substitute Brahim Díaz enjoyed some positive moments, and Gabriel Jesus and Bernardo had good opportunities to add gloss to an already comprehensive win.

Chelsea searched for a glimmer of comfort, and came close to a consolation late on as Ross Barkley broke down the right and crossed for Tammy Abraham. Bravo managed to do enough to scramble the ball away.

Overall, the Sarri effect was not instantly tangible for Chelsea, but no new manager trying to get some new ideas across while getting to know a new squad in a new environment would appreciate being judged against this City side in this mood.