Agüero convinces Guardiola of his enduring value to City 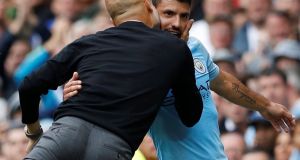 Manchester City beat Huddersfield 5-1 in an FA Cup fifth-round replay in March last year. Sergio Agüero scored twice but post-match discussion centred largely on whether he had a future at the club.

Pep Guardiola had made it clear he felt there were elements of the Argentinian’s game that did not fit with his vision and had brought in Gabriel Jesus with a view, it seemed, to easing Agüero out.

That evening Guardiola’s mood was irritable, as it tends to be when he is forced into evasion. He had, he said, answered the question of Agüero’s future “10 times”; more accurately, he had been asked the same question 10 times.

“The media knows my opinion,” he added.

By that point, his squirming meant everybody did and perhaps, had Jesus not suffered a knee injury that let Agüero back into the side, the Argentinian would have left.

Almost 18 months later, City last week again hammered Huddersfield at home. This time it was in the league, City racked up six goals, and Agüero got three of them. But the biggest change was in Guardiola.

“With the ball and without the ball,” the manager said, “he is sharp and intelligent and, of course, his talent to score goals is always there. The pass was so good but the finishing is outstanding.”

The finishing has always been outstanding. Agüero has scored 204 goals in 295 appearances for City in all competitions, including 146 in 208 Premier League games, five times getting more than 20 in a season.

He has surpassed Eric Brook as City’s all-time leading scorer. Only nine players have scored more Premier League goals than him (none at a higher ratio of goals per game) and Les Ferdinand (149) and Michael Owen (150) could be surpassed in a couple of weeks. Another 18 goals would take him past Jermain Defoe and Robbie Fowler to sixth in the list.

Another 30 and he surpasses Thierry Henry as the player to have scored most Premier League goals for a single club.

That is a remarkable level of consistency but it’s not just Guardiola who has been unsure of him. Not only has Agüero never been named footballer of the year by either the Professional Footballers’ Association or the Football Writers’ Association, but last season was also the first in which he was named in the PFA team of the year.

Perhaps there has been a more general scepticism about his all-round contribution, or perhaps, for all his ability, he is simply not starry enough off the pitch to thrust himself into the consciousness.

After all, in seven years at City, he seems to have lived an almost monastic life. There is little sense of him embracing Manchester and his English remains rudimentary, while the Amazon documentary All or Nothing gave the impression his flat is devoid of natural light. His son, who lives in Argentina with Agüero’s former wife, the daughter of Diego Maradona, visits one week every month, but apart from that it’s not clear exactly what he does, other than training and scoring goals.

Other than his City and Argentina teammate Nicolás Otamendi, the player he seems to get on best with is David de Gea, whom he knows from their time together at Atlético Madrid. That is not to suggest, though, any lack of affection for City. In previous seasons when he has had protracted spells out with injury, it was common to see him in the tunnel, anxiously following games with an engagement few players seem to share.

Agüero acknowledged he had to change his game if he was to succeed at City under Guardiola.

“Pep is a very demanding coach and adapting to what he wanted was not easy during the first year,” he told the Argentinian channel TyC at the end of last season, admitting he had made his manager “angry”.

“As well as my responsibilities as a striker, he wanted to get me involved as the first defender of the team . . . I think this season we were on the same page with Pep. He told me he was happy with my performance and his anger was worth it because I had a better year.”

There is no reason why a player of Agüero’s type cannot succeed in a Guardiola side. After all, the last of the four successive league titles Guardiola won as part of Johan Cruyff’s Barcelona was won with Romário up front and so closely did Agüero resemble the Brazilian when he first emerged at Independiente he was given the same nickname – “Chapulín” (Grasshopper).

If Guardiola persists with the 3-1-4-2 deployed against Huddersfield, Agüero and Jesus will presumably continue to be partnered. But the change in Agüero means that when the system features a single striker, he would seem to have the edge over Jesus.

Agüero may never get close to Romário’s remarkable tallies of goals (depending exactly what is included totals range from around 600 to more than 1,000) but, at only 30, so long as he keeps defending, there is plenty of time for him to keep climbing the Premier League goal rankings.