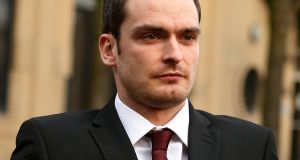 A schoolgirl told police she felt “compelled” to perform a sex act on the footballer Adam Johnson during an encounter in his car, jurors at the former Sunderland player’s trial have heard.

In a tearful interview with a child protection officer, the girl, 15, sobbed as she described feeling “disappointed in myself” after the alleged sexual activity behind a Chinese takeaway in County Durham last year.

The teenager – still wearing her school uniform – told the police officer that Johnson had asked for a “thank you kiss” after giving her a signed Sunderland football shirt.

On Monday jurors at the trial of the England player, 28, at Bradford crown court watched a video of the police interviews.

In her second interview, the girl, who cannot be named, described how she felt “awkward” when Johnson allegedly kept trying to place her hand on his penis while they kissed in his Range Rover.

“He put my hand on his trousers then put my hand back down there [HIS TROUSERS]so I felt a bit awkward if I pulled my hand back. I just sort of felt compelled to do it in a way because he took his trousers down … It’s hard because I can’t remember how it started – I just tried to forget about it,” she told an officer.

The schoolgirl described how she performed a sex act on Johnson “for a couple of seconds” before stopping when the footballer allegedly said “if I kept going he’d have to have sex with me”.

She claimed she did not know whether to perform a sex act on Johnson or not but did it “because I didn’t know what his reaction would be if I didn’t”. The girl alleged the sex act was Johnson’s idea “because he sort of put his hand on my back, not forcing but gradually pushing forward a bit”.

Asked how she felt after the alleged sex act, the teenager said: “Not very good. Like … I don’t know. I was disappointed in myself.”

Earlier, jurors heard the girl’s first police interview in which she described how she felt shocked and worried after allegedly being groped by the footballer.

The girl described how she avoided meeting up again with the then Sunderland player because she “knew it was wrong”. However, she said she was reluctant to go to the police.

Of the alleged sexual activity on 30 January last year, she told the police officer: “I would say I was a bit shocked. As much as I was expecting it to happen I was still shocked it was. I was a bit worried because I knew I had done something wrong. It wasn’t that I didn’t want … it’s just I knew it was wrong. I’m not one for being able to hold guilt.”

The court heard that the girl, who “idolised” the footballer, added: “I didn’t want anything to be done about it – I just wanted to drop it, but my mum said what he’s done is wrong.”

The schoolgirl was interviewed at Durham police station, with the footage shown in court during the second day of the trial.

She claimed the relationship started when she sent a friend request on Facebook to Johnson “who I’ve idolised for a long time so it was surreal”. Johnson accepted her request later the same day, the court heard, and they later exchanged mobile numbers.

The girl told police Johnson knew her age, what school she went to, that she was a Sunderland season-ticket holder and even where she sat at the Stadium of Light, the jury heard.

She described what is alleged to have happened when the two met behind the Chinese takeaway – weeks after he accepted her friend request. “I was kissing him for quite a while. Then he undid my button on my trousers and my zip and it took him quite a while to do that. He put his hand down my trousers and started, like, putting his hands in my knickers,” she claimed.

“I said ‘haven’t you got to go’ because it was nearly six – it was after the time he said he had to go – and I tried to bring it to and end because it was getting slightly awkward and stuff.”

She described how Johnson sent her further texts on WhatsApp after the alleged sexual encounter, wanting to meet up again.

“He sent me more messages offering to meet up and asked to meet the next day, but I was with friends. It wasn’t that I didn’t want to, but I was a bit hesitant because I knew it was wrong. I just said I was going out for a meal. Then everyone started to find out about it,” the girl told police.

She described how she “broke down” and confided in her parents when schoolfriends learned about her and Johnson. She was taken to a police station by her mother and a family friend, the jury heard.

The court has already heard allegations that Johnson knew the girl was 15 within hours of them exchanging messages on New Year’s Eve 2014.

Days after the alleged sexual touching, Johnson is said to have searched the internet for “legal age of consent”.