A United stand behind Solskjær – for the moment

The team have been compared to Frankenstein’s monster, a collection of ill-fitting parts 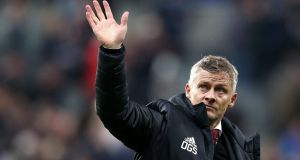 Should Ole Gunnar Solskjær need cheering up at any point in the next few days he can at least reflect that Manchester United are still the club everyone is talking about. In terms of the title race Manchester City’s defeat by Wolves was the shock of the weekend, the result absolutely no one was expecting. Yet it was United’s altogether more predictable failure at Newcastle that has dominated the news agendas.

United are in the bottom half of the table, having made their worst start to a season for 30 years. Solskjær has still not won away from home since being appointed permanent manager and in their past three away games United have failed to score, not even registering a shot on target in their Europa League match against AZ Alkmaar last week.

It seems a long time now since the euphoria that followed March’s stirring win at Paris Saint-German in the Champions League, when Solskjær was pictured celebrating with Alex Ferguson and Eric Cantona and quoted as saying : “We are Man United: this is what we do.”

That result more than anything persuaded Ed Woodward and the United board to call off their search for an experienced manager and promote the caretaker. Yet no sooner was the decision implemented than results began to fall off a cliff.

Alan Shearer believes it is the worst United side he has seen in years, David de Gea admits everything is going wrong, and Gary Neville has suggested the fault lies at boardroom level.

How serious is the crisis and how long will it continue? It depends how quickly the club can come up with answers to the following questions.

Could United be relegated?

Unlikely, though nothing is impossible and anyone with memories of 1974 will doubtless see certain similarities with the present situation.

United bought three good players in the summer and will spend again in January if they have to, though if results have not improved by that stage the bigger question mark will be hanging over the manager.

Solskjær has suggested a goalscorer will be the priority, and United could certainly use a reliable one along with a regular centre-back partner for Harry Maguire, yet the days when the club could merely click their fingers and expect the latest hot young prospect to join are long gone.

Most capable players would want to sign for a club in the Champions League bracket for a start, not one operating in the wrong half of the domestic table and struggling to convince in the Europa League. No one is ever too good to go down, and United at the moment are not striking many observers as good in any way. Yet it would still be a surprise to find players of the quality of Paul Pogba, De Gea and Maguire embroiled in a relegation battle.

Why are they in this mess?

The Neville theory is that United have hired and fired too many managers post-Ferguson, all with contrasting styles and philosophies, and because they have backed each with fairly generous amounts of money they have ended up with the footballing equivalent of Frankenstein’s monster, something that from a distance resembles a team but on closer inspection turns out to be a collection of ill-fitting parts rather clumsily bolted together.

This is a valid criticism, as is the failing to recruit a director of football or its equivalent despite identifying the need more than a year ago. Yet in terms of what is happening right now many supporters would simply point at the decision to over-promote Solskjær. He remains an inexperienced manager, and there was simply no need to appoint him before the end of last season.

Had United stuck to their original plan Solskjær might be back in Norway by now with a fat cheque in his pocket and his reputation as a United hero forever enhanced. Instead he is having his limitations exposed on a weekly basis, and even the goodwill carried over from his days as a popular, likable player will soon be in short supply.

What can they do to fix it?

They could try sacking the manager and bringing someone else in, maybe even acting quickly enough to make the adjustment in the present international break. If they do pursue that course of action the executive vice-chairman Woodward would be duty bound to tender his resignation too as an admission of joint culpability.

The chances of that happening are vanishingly small, so Solskjær will probably get to stay a little longer in the hope he can dig himself out of a hole, starting at home to Liverpool in their next game.

The manager has pleaded for patience from the board, and patience was what Ferguson was granted in his early years when the board could see he was doing something right, even if results were not immediately forthcoming. There is little evidence yet that Solskjær is on the right track, and what he really must hope is that United can hold their nerve and not be panicked by the latest ignominy or disappointment.

Having publicly declared confidence in Solskjær just a couple of weeks ago, Woodward can hardly do a U-turn just yet, especially as Mauricio Pochettino is no longer looking quite as clever as he was last season.

The pattern for underperforming managers at Old Trafford is well established. The club gives them their full backing right up to the point when they don’t.