Özil barely recognisable as player who made fiery start to season 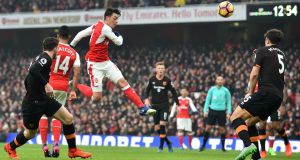 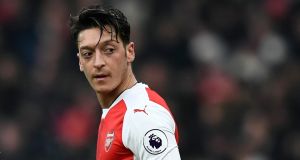 With the score at 0-0 against Hull and Arsenal spluttering, the ball came out of the air to Mesut Özil. The Germany midfielder was in an advanced position, unmarked on the edge of the six-yard box. As Alexis Sánchez’s cross came to him he sized it up, adjusted his body to the perpendicular and hit a volley with that same left foot that had bamboozled an entire Ludogorets defence back in November. Needless to say, the ball flew horribly over the bar.

It is plain to all that Özil is not enjoying himself at the moment. He has lost his form to such an extent he is barely recognisable as the player who made a fiery start to the season. In the autumn he was scoring goals and dictating games, a deserved man of the match in the 3-0 dismantling of Chelsea at the Emirates. What was more, the notoriously willowy midfielder looked muscular, as if he was finally ready to add a necessary physicality to his undoubted skill. It did not last.

With five goals and only four assists in the Premier League this season, Özil stuck out like a sore thumb in Arsenal’s narrow win on Saturday. Indeed, it was possible to feel sorry for the £42 million (€49.3m) World Cup winner. Visibly lacking in confidence, almost everything he tried failed. The closest player to Sánchez, Özil was unable to combine with the Chilean and in the first half several promising moves broke down at his feet. There was an uncertainty to everything he did that allowed a well-drilled Hull to close down his space. Rather than looking frustrated, he seemed flummoxed.

With all the other pressures at the Emirates Stadium, from another title charge that came apart in those defeats by Watford and Chelsea to the uncertain future of Arsène Wenger, Özil’s form is not Arsenal’s most pressing concern. But the fact is that three and a half years into his career in north London, he has yet to achieve consistently what many, Wenger foremost among them, believe he is capable of.

Questions remain over Özil’s ability to stand up to the rigours of more physical opponents and that Chelsea game in September was a rare example of him dictating a high-stakes match. Furthermore, there is a sense that he is capable of giving his best only from a No 10 position that limits Arsenal’s flexibility, boxing them into a 4 2 3 1 formation.

A new contract, believed to be worth in the region of £180,000 a week, is on offer but there may come a point at which minds start to change about building a team around him.

“I felt he was not completely confident technically today,” Wenger said. “That’s a problem because you think he can deliver something special. I had a chat with him yesterday and he looked all right. Maybe it’s time for him to score. He needs to find confidence again. He misses chances that don’t look infeasible for him.”

However, an opportunity for redemption is around the corner and it would be apt should Özil step it up at Bayern Munich on Wednesday in the first leg of their Champions League last-16 tie. Bayern tried to sign him from Werder Bremen before he opted for Real Madrid and again two seasons ago from Arsenal.

He has history against Bayern. There was the moment, nine minutes into the first leg of their 2014 last-16 tie, when, after a sparkling start, Özil had the chance to give Arsenal the lead but missed a penalty. The tide turned, Arsenal lost 2-0 and went out before the quarter finals again. Last season he scored an injury time second goal to seal an Arsenal win over the Bundesliga champions at the Emirates in the group stage.

Last week Michael Ballack suggested the 28-year-old should finally join Bayern if he wishes to win “major titles”. Well, there is one major title still available to Arsenal this season and getting a positive result at the Allianz Arena would be a step towards achieving it.

“It’s a good opportunity,” Wenger said. “We’ve had bad experiences against Bayern but we have already won there as well. We play the first game away from home – so it’s important that we protect the second game. I feel, to have a chance to qualify in the second leg, that will be very important. So we must go there, not hide but defend well as a team.”

That’s the challenge, now it’s over to Özil.

5 Maradooo! A preternaturally gifted artist and a rebel outsider