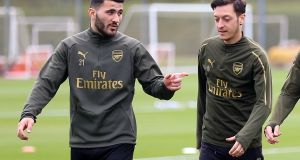 Sead Kolasinac and Mesut Ozil: Took part in training and are available for selection for the home clash against Burnley. Photograph: Nigel French/PA Wire.

Unai Emery is confident Mesut Özil and Sead Kolasinac will be mentally ready to return to the fold for Arsenal’s Premier League game against Burnley on Saturday after the pair missed the opening weekend win at Newcastle amid concerns for their safety.

Özil and Kolasinac had been involved in an attempted carjacking near the Germany international’s north London home by an armed gang last month, with the Bosnia and Herzegovina defender confronting their attackers.

Two men have since been charged with a public order offence after a separate incident outside Özil’s property in the build-up to last weekend’s opening round of fixtures, with Arsenal having opted to omit the players for the win at St James’ Park in the wake of the second security incident.

While Özil missed training at London Colney on Wednesday through illness, both players took part in the first-team’s session on Thursday with Emery confirming they were in the right frame of mind with their mentality now focused on playing “for training and matches”.

“Am I pleased that they’re back? Of course,” said the Arsenal manager. “For us, for me, first they’re a person and second they’re a player. We’re continuing our way with all the players who are ready with us and consistent every day in training. They came back on Tuesday and Mesut was sick yesterday but, today, is better.

“When they are training regularly every day and consistent every day it’s good news for us because we can choose them to help us in matches, and the first match is Saturday.

“Really, really, my focus is to be positive and focus on making sure the players are 100 per cent here in their minds. I want to help them to be with us, back to normality in training, thinking about football. Above all, I want them to be able to focus on each training session and each match.”

While it seems unlikely that either player would start against Burnley at the Emirates Stadium, not least with Arsenal having won at Newcastle and with their summer signings eager for greater involvement, when asked whether they would be mentally ready to play, Emery said: “Yes, 100 per cent. The mentality is now on focusing on us, for training and matches. Each training [session] gives us good information and good options with them to take the decision if they’re going to be with us on Saturday or be in the first XI. But we are going to wait until our last training session [before making a decision on selection].”

Two men, Ferhat Ercan of Highgate, and Salaman Ekinci of Tottenham, were arrested on August 8th outside Özil’s north London home and have since been charged with a public order offence. Both players are understood to have taken on extra security since the original carjacking incident in July.

“The club is working and helping them with it [private security]” added Emery. “At the moment they are calm with us every day. That will help, with their minds only focused on that training or those matches.”