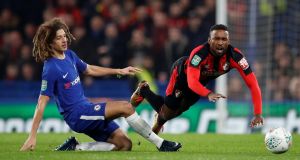 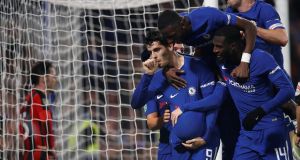 Antonio Conte looked pained by much of this occasion, his celebrations at the end betraying relief rather than delight, though squeezing a semi-final place from such an anxious contest may end up being to his advantage.

At least he can point to his much-changed side’s spluttering display as further evidence his squad lack the required depth to compete on all fronts. The cavalry may have come to the rescue in stoppage time, but the board may still have to dig a little deeper when in comes to the transfer window next month.

This proved to be a slog against a sprightly Bournemouth team whose own display improved markedly as the night progressed for all that they had only gained glimpses of goal against a defence marshalled impressively by the young Ethan Ampadu until the final minute.

Then came the drama. The visitors thought they had claimed the extra half-hour when, with panic gripping the home defence, Jordon Ibe calmly squared the ball across the penalty area and Dan Gosling, granted too much space by a dithering Davide Zappacosta, curled home a fine first-time shot beyond Willy Caballero.

That had been reward for a one-sided second period when the anxiety was all local. Yet Conte had already flung on his elite players by then and as the visitors warmed to the prospect of extra-time, Chelsea countered at pace. Eden Hazard’s back-heel into space behind Simon Francis was astute, with Álvaro Morata bursting through to squirt a shot under Artur Boruc and into the net. The tie was won, however unconvincingly.

There had been a confidence to the revamped home side from the outset, a slickness to their approach play which regularly exposed Bournemouth’s back five and which initially suggested this might actually be a comfortable night. Willian and Pedro scuttled forward at will, Kenedy and Zappacosta forever charging aggressively up their respective flanks in support, with the visitors permanently stretched.

The zest to Chelsea’s passing set an upbeat tone, allied with a spikiness which saw Ampadu swing into a rash challenge on Jermain Defoe within the first 90 seconds. The 17-year-old, on his second start for the club, was shown a yellow card though it did not dissuade him from further hefty tackles. Defoe limped on until just after the quarter-hour mark when the pain in his right ankle forced him off.

Such is Bournemouth’s predicament in the Premier League that they can ill afford to lose more key personnel to injury, with Charlie Daniels and Josh King having succumbed in Sunday’s drubbing at home to Liverpool. By the time Defoe was receiving treatment back in the changing rooms the home side had established their lead courtesy of Willian’s sixth goal of the term, crisply converted into an unguarded net after a move that had left the visiting side dizzied.

Kenedy, collecting from Michy Batshuayi, had disorientated the entire back-line with an unanticipated back-heel to liberate Cesc Fàbregas into the area. The Spaniard drew Boruc before squaring for Willian to score.

Other opportunities were passed up, Steve Cook doing well to choke Batshuayi’s attempt from close-range after a frantic scramble in the penalty area. The Belgian air-kicked in front of goal when it seemed easier to score from Zappacosta’s fizzed centre, with the Italian tormenting the makeshift wing back, Ryan Fraser.

Indeed, Bournemouth’s only route back appeared to be via Chelsea complacency. Willian, who has not always been in favour under Conte, almost gifted an equaliser after stopping in the assumption a free-kick would be awarded against Ibe. The substitute merely played on in possession, darted into the box but sliced his attempt wide of the near post.

Such glimpses of goal had been rare, Lys Mousset nodding another attempt straight at Caballero, though there was more urgency to the visitors after the interval, particularly when Fraser found himself in more familiar areas higher up the pitch, as the home side’s energy rather drained away.

The Scot’s delivery from corners stretched them, Chelsea players heaving to clear their lines, with Ibe and Mousset a fluid and menacing front line. Ampadu, more normally a defensive midfielder, was a blur of blocks and interceptions at the heart of a back three, impressively stifling another effort from Mousset, but the momentum had swung to the extent that Conte sent on Hazard and Tiémoué Bakayoko on the hour to reinvigorate a team who appeared to have lost their way.

Morata would follow for the ineffective Batshuayi before too long, the Belgian having clearly failed to demonstrate he is worthy of more Premier League involvement, with the anxiety having spread to the home bench. The coaching staff rose en masse to dispute decisions and Conte’s agitation was permanent. Their mood was not improved by the non-award of a penalty after Adam Smith’s push on Kenedy, a player whose misdemeanours in recent times – from offensive posts on social media to untimely yawns in team meetings – have counted against him.

He, at least, impressed even as this game drifted towards that dramatic conclusion. For Chelsea, a semi-final awaits. – Guardian service