Donegal win gives Séamus Colman another reason to be cheerful

Omens are good for Gibraltar game, but Ireland captain is taking nothing for granted 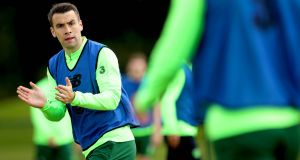 Séamus Coleman looked happy with his lot as he reflected on having seen Donegal beat Tyrone in Cavan on Saturday. But then the Irish skipper has a few other reasons to be cheerful right now, and, as he looked forward to Monday evening’s game against Gibraltar, it seemed to be showing.

For one thing, he and the rest of the Everton defence started firing again over the tail-end of the season, with nine clean sheets in his final 11 appearances of the Premier League campaign just concluded.

During the run, Everton beat Arsenal, Chelsea and Manchester United, and the sequence ended with a 2-0 defeat of Burnley in which he scored. After a long lay-off through injury and a sometimes challenging return to action, Coleman sounded positive here about having the opportunity now to take some time away before going again with the Goodison Park outfit.

Donegal’s campaign might prove to be a bit of a distraction as he is settling into the new season, he hopes. In the wake of witnessing Saturday’s four-point victory, he is certainly confident his county can secure another Ulster title in a couple of weeks’ time.

He seemed as entertained by the amount of attention his attendance had attracted as by the game itself. “I’m glad I asked the manager’s permission before I went,” he said with a smile. “I’m sure he would have found out by now.”

The widespread positivity he encountered at Breffni Park, meanwhile, came as reassurance, he said, that the public is re-engaging with the Irish team after a succession of disappointing performances last year prompted growing dissatisfaction with the style of play, and ultimately cost then-manager Martin O’Neill his job.

Coleman would not be one to turn on a coach, but he still suggested here that he is happy with the shift in emphasis since McCarthy returned to the role.

“I think it’s the best way to play, to try and win the ball back as high up the pitch as possible against good teams,” he said. “Even against Denmark we tried to do it. There are going to be times where you are going to be picked off by the likes of Eriksen playing balls around the corner, but if we are trying to come out from the back and teams are pressing, it’s difficult. That’s not what you want. If we can win the ball back [further up the pitch] and play from there, then great.

When we were 1-0 down against Denmark we played some really good football, so we are capable of it

“That’s what we’ve been trying to do since the manager has come in,” he continued. “Against Georgia we pressed them and tried to win the ball back as high up the pitch as we could, and then play from there. At times we did that very well against Georgia. And when we were 1-0 down against Denmark we played some really good football, so we are capable of it.

“This time, we are playing at home in front of our fans, so the result is the most important thing, but of course we want to get the ball down and put on a performance.”

They will, however, he insisted, treat it like any other game – especially after the way the game in Gibraltar panned out.

“Honest to god,” he says, “there will be no complacency. I can’t read the future, I don’t know how we’ll start against Gibraltar, whether we will be at it straight away. But nobody here is taking anything for granted. That’s not what this group is about.

If you put Denmark in front of us again, our approach is not going to change

“We know what they are about from the last time we played them and from a few years ago, they have improved so much. Whether that’s down to the coach, I don’t know, but they know their roles really well. They have good players on the ball. But it’s a help to know that we can’t take them for granted.

“You have to stay professional and do your job in football. If you put Denmark in front of us again, our approach is not going to change. We’re not thinking, ‘it’s Gibraltar and we should be winning 3-0, 4-0 or 5-0.’ We need to play the game and see where that takes us.”

Another step closer to qualification is clearly the intention, but if things don’t go to plan then the outlook will suddenly seem an awful lot less sunny between now and the start of September when the Swiss are due in town.