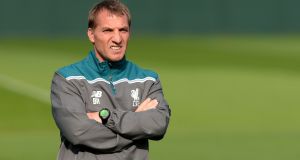 Brendan Rodgers has emerged as odds-on favourite to take over at Celtic as the club step up their recruitment process. Photograph: Martin Rickett/PA Wire

Dermot Desmond hopes Celtic can conclude their search for a new manager within days after admitting Brendan Rodgers would be a “great” choice for the Parkhead post.

The Hoops majority shareholder confirmed the Scottish champions had started talks with “in excess of six” candidates as they step up their search for Ronny Deila’s successor.

But Rodgers, 43, now appears to be the frontrunner, with Desmond admitting the former Liverpool boss is among those to have been interviewed.

The billionaire Irish tycoon told the BBC: “We’re excited about the managers we’ve interviewed and discussed and hopefully in the next few days we’ll decide on a manager and get into negotiations.

“There is lot of people (being considered). I wouldn’t speculate in this moment in time. All the people we have interviewed merit the job.”

When pressed if former Anfield boss Rodgers was among those being looked at, he said: “I can’t tell a lie.

“He’s a great manager. He’s proved it at Liverpool and I think he’s a worthy candidate for Celtic – as all the other candidates are.”

Former Parkhead defender Malky Mackay is also understood to have been interviewed in recent days, while the likes of David Moyes, Neil Lennon and Roy Keane are still listed among the likely contenders.

But departing assistant boss John Collins believes Desmond should focus all his efforts on trying to land Rodgers.

Speaking at a William Hill media event ahead of this weekend’s Scottish Cup final between Rangers and his old side Hibernian, Deila’s number two said: “Brendan has been linked with the job in the last couple of days and I think he would be a brilliant choice. I like him a lot.

“I enjoy watching his teams play football and I enjoy listening to him, so I think he would be a terrific choice.

“There are lots of others in the mix, but Brendan likes his teams to play with the ball on the ground, to build from the back and through midfield.

“He wants them to be entertaining and dominate the ball with possession, so Celtic should always strive for that type of manager.”

While Desmond was speaking to reporters after taking part in the Dubai Duty Free Irish Open at The K Club in Kildare near Dublin, Celtic were releasing a statement urging their fans to show patience.

In a statement posted on the club’s website, they said: “Following some speculation regarding the appointment of a new Celtic manager, the facts are as follows.

“The club has been and will be speaking to a number of candidates and we will take our time to go through this process thoroughly and in the proper manner. There is no ‘preferred’ candidate.

“We will continue this process with the aim of identifying a new manager who we believe will deliver success to the club.

“Clearly we will not be able to provide daily updates on this issue. However, our supporters will be the first to know when a new manager has been appointed.”