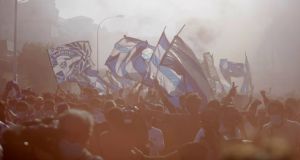 Deportivo fans had already gathered outside the Riazor before the match was postponed. Photo: Cabalar

Deportivo La Coruña have been relegated to Spain’s third tier without kicking a ball after their final game of the season against Fuenlabrada was postponed.

It is the latest blow in the decline of a club that, in 2003/04, reached the semi-finals of the Champions League and were Spanish champions four years previous to that.

Just a few months after that Champions League semi-final they were held to a 0-0 draw by Shelbourne in the first leg of their Champions League third qualifying round clash at Lansdowne Road before beating Pat Fenlon’s side 3-0 in Spain. That Shels run remains the furthest an Irish club has ever got in the premier European club competition.

On Monday, several Fuenlabrada tested positive for coronavirus, with La Liga taking the late decision to call off the game at the Riazor. Instead, results in the matches that went ahead sealed Deportivo’s fate.

La Liga also confirmed that the other 11 matches in the final round would go ahead as planned. “This is the solution that best protects the health of the players and the overall integrity of the competition,” the statement added.

Deportivo had to win their final game and hope other results went their way. Instead, wins for Lugo and Albacete mean they cannot climb out of the bottom four even if they win the rearranged game.

Fuenlabrada, who reportedly saw 12 players return positive Covid-19 tests, can secure a promotion play-off berth with a draw. Dépor were losing play-off finalists just last season, having dropped out of the top flight in 2017-18.

Huesca had already sealed promotion but pipped Cádiz to the title with a 1-0 victory at Sporting Gijón. Zaragoza, Almería and Girona will contest the play-offs with either Elche or Fuenlabrada.

Numancia, Extremadura and Racing Santander join Dépor in falling into Segunda B, a third tier comprised of regional divisions. There are usually 80 teams at this level, but that will expand to 100, in 20 groups of five, for next season.

It is the first time in 40 years that Deportivo have dropped into the third tier, and comes 20 years after they won their only La Liga title.

1 Robbie Henshaw likely to be the only Irish change for France finale
2 Bartomeu resigns and drops bombshell of Barcelona joining European Super League
3 Seán O’Brien: Anger over my parents’ break-up never left me
4 Cian Healy: ‘Realistically I got away with murder when I was younger’
5 Ireland's centre will hold thanks to Henshaw and Aki’s midfield muscle memory
Real news has value SUBSCRIBE
Crossword Get access to over 6,000 interactive crosswords