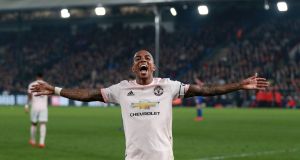 It’s as you were at the top of the Premier League table, after both Liverpool and Manchester City picked up three points at home last night. Leaders Liverpool maintained their one-point advantage at the top with a 5-0 thrashing of a tame Watford side at Anfield, Sadio Mane and Virgil van Dijk both scoring twice. Pep Guardiola’s side however kept up the pressure with a 1-0 win over West Ham, thanks to a second-half Sergio Aguero penalty. Elsewhere Manchester United defied a string of injuries to beat Crystal Palace 3-1 at Selhurst Park, Romelu Lukaku back in the goals with a first-half brace. It was United’s eighth-consecutive away victory under Ole Gunnar Solskjaer - a club record. With their title challenge fading at Burnley last weekend Tottenham Hotspur are now being dragged into a battle for a place in the top four - they were beaten 2-0 by Chelsea at Stamford Bridge, with Blues manager Maurizio Sarri dropping Kepa Arrizabalaga after his side’s now infamous League Cup final defeat to Man City. Meanwhile Arsenal were comfortable 5-1 winners over Bournemouth at the Emirates and Southampton moved out of the relegation zone with a 2-0 win over Fulham, who are 10 points adrift from safety.

In today’s rugby statistics column John O’Sullivan has handed top marks to Wales on his Six Nations half-term report card, and has suggested the Championship leaders have benefited from their sequence of fixtures in this year’s tournament. He writes: “Gatland made wholesale changes for the game against Italy, resting a host of frontline players, allowing him to work on a couple of fronts with one eye on the England game. . . In a World Cup year all six head coaches are juggling the twin focus of being competitive in the Six Nations and working through a long list of players who might make the 31-man squads for Japan.”

1 Coronavirus: Belfast patient passed through Dublin Airport before travelling to Northern Ireland
2 Corona beer firm reeling after 8% slide due to coronavirus
3 David McWilliams: Ireland has revolted against its contented class
4 Orange weather alert issued as Storm Jorge set to batter Ireland
5 Cork grandmother goes on trial for felling Sitka spruce trees
6 Horse owners embarrassed ‘perfectly good’ stallion sent for slaughter, court told
7 Post-Brexit Britain still does not understand Ireland
8 Coronavirus: reinfection discovery may be blow to vaccine hopes
9 ‘I woke up the next day in a guy’s house covered in bruises’
10 We bought the house. Then its value plunged by almost €200,000
11 Pharma giant AbbVie warned Government against ‘unfair’ €572m tax bill
12 A peek inside Dublin's new €52m Hard Rock Hotel
13 Predictions of ‘skin and hair flying’ as FG selects 13 of up to 60 Seanad hopefuls
14 iPad use in schools is ‘distracting’ and leads to shopping and gaming, report finds
15 Life as a Facebook moderator: ‘People are awful. This is what my job has taught me’
16 Clonlara case study: ‘Who the hell gave planning down here, day one?’
17 Fianna Fáil and Greens discuss possible revision of National Development Plan
18 ‘The only time apartments were viable was in . . . Ballsbridge, Killiney and Dalkey’
19 Belfast feels anything but claustrophobic to this Dubliner
20 Nearly 200 artists sign letter urging action on sexual harassment, bullying in the arts
21 Soreness is good, scales are pointless: The 10 biggest myths in fitness
22 Why Irish banks are now looking beyond vulture funds on problem loans
23 Fear and solidarity drives wearing of surgical masks in Japan
24 Flight attendent seeks High Court injunction against Aer Lingus
25 Coronavirus: What we know so far about how Ireland is affected
26 ‘Nobody cares’: Children freeze to death as Syrians flee onslaught in Idlib
27 What should you do if you think you might have coronavirus?
28 How well paid do you think you are? Here’s how to work it out
29 Survey finds shift from cash to its virtual equivalent now at tipping point
30 Unwillingness to swallow bitter pill of higher EU budget share ‘shocking’
31 We have little chance of building enough homes to meet election promises
32 Opposition grows among school groups to plans for changes of SNA allocation system
33 Want to protect yourself from coronavirus? Then wash your hands
34 ‘Our Irish breakfast here isn’t quite as good as my mammy’s at home’
35 Coronavirus: ‘Viruses don’t recognise boundaries or borders’
36 Northern Ireland is united in annoyance at Republic’s ignorance on Sinn Féin
37 Netflix: 10 of the best new shows and films to watch in March
38 Patrick Freyne on Love Is Blind: It’s Gilead, Love Island and Blind Date rolled into one
39 What is coronavirus and what should I do if I have symptoms?
40 Ighalo and Fernandes net as Man United cruise past Brugge
Real news has value SUBSCRIBE