Norweigan was part of plenty of famous victories during his time 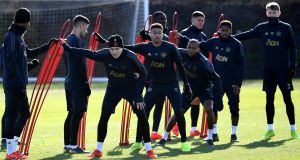 Manchester United’s train ahead of their Champions League Round of 16 meeting with Paris Saint-Germain at Old Trafford. Photo: Franck Fife/Getty Images

Ole Gunnar Solskjær was again note-perfect when stating it has been “too long” since a great European night for Manchester United at Old Trafford.

After 10 wins in 11 games, United supporters are enjoying the ride under their interim manager and the attacking style of play he has brought back to the club. In relishing the prospect of the first ever meeting with Paris Saint-Germain in tonight’s Champions League last-16 first leg, Solskjær was once more in tune with those in the stands.

Yet Solskjær’s populist act is backed up by a real sense that PSG can be eliminated from the competition.

“Yeah, it has been too long. Maybe one of the last exciting knockout games was against Real Madrid, when Nani was sent off,” he said of Alex Ferguson’s final European game, a 2-1 loss in March 2013. “Of course we had Bayern too [under David Moyes in 2014]. The players and the supporters have been looking forward to this, “Maybe my last [as a player] was Roma when we won 7-1. We lost 2-1 away and the manager was so happy. He said: ‘That’s okay, we will win at home.’”

Solskjær believes United “may surprise a few teams” and go all the way to this year’s final. If the notion of United reaching the competition’s showpiece seems fanciful, so did the thought of United closing the 11-point gap to fourth place when the Norwegian took over from José Mourinho in mid-December.

If still an outside prospect, Solskjær has at least made his players believe anyone can be beaten. Modern football is all about man-management and the Norwegian’s has been impeccable, particularly when compared with his predecessor.

Anthony Martial, for one, believes the Portuguese’s sacking has liberated United. “We have got a coach who has different intentions and we are trying to do what we asks,” he said. “Perhaps it is easier to play this style of football and not the style of football he [Mourinho] asked. When our new coach came in he had a lot of confidence, a lot of determination, that was really helpful. We are trying to pay him back in kind and things are working out well at the moment.”

This, again, will chime sweetly for fans who grew, in the main, to detest Mourinho’s dour approach. All managers require luck and the stars have aligned for Solskjær with regard to the absences of PSG’s Neymar, Edinson Cavani and Thomas Meunier through injury.

“Of course any team that is missing players like Neymar, Cavani, Meunier will miss them,” says Solskjær. “But it gives other players a chance. It makes it more unpredictable for us, who they are play. When you see that front three, you know how they will play so we are guessing a bit.”

Solskjær has scouted the French champions. “It is difficult to compare games because when they play in the league, they know they are going to win it anyway so they approach differently to the Champions League,” the 46-year-old said. “But it is always nice to see players live, you see different spaces, principles - you saw how lightning quick Kylian Mbappé is. You try to do due diligence.

“It has been fantastic to see their progress. I played against them [PSG]for Molde in 1995 in the Cup Winners’ Cup. The difference in their challenge now is fantastic. They have got some of the world’s best players, one of the biggest goalkeeper legends in Gianluigi Buffon, Thiago Silva has been one of the best centre-backs, they have one of the most exciting young players in Mbappé, and the most expensive ever in Neymar. That tells you everything about their evolution.”

Solskjær exudes supreme confidence in the depth of his resources, though, claiming that no one is guaranteed a place in his first XI.

“I have got a big strong squad and I think it is shown,” he said. “David De Gea, for example, is a clear No 1 but Sergio Romero is a fantastic goalkeeper, played in the World Cup final, 96 caps for Argentina. The depth in the squad is very good and we want to play our best football as often as possible.”

Solskjær continues to draw the best from Martial, whose strike from inside United’s half in Saturday’s 3-0 win at Fulham was reminiscent of Cristiano Ronaldo’s goal in a 2-1 win at the same venue in 2007.

“He is asking me to attack more. That is my job after all. To make the difference to be more decisive. Things are working out well for the other attackers and I hope we can continue to be as effective,” said the 23-year-old, who is listening to Solskjær’s demand to score more “ugly goals”.

“Yes, it is true he has often said that to me and even previous managers have said that - that you have to work on this. If I do manage to do that, get beyond the defence, I think I will score more goals,” the forward said.

Martial, like surely all United players, would be happy to see Solskjær made the permanent manager. “We hope we can continue but the final decision isn’t with us,” he said.

If United can knock PSG out, though, it would certainly help the Norwegian’s case – Guardian