Pandemic is parked as Liverpool are stunned in extra-time 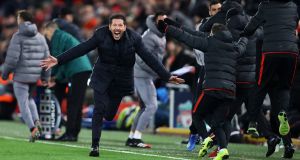 Strange old times. On one side Virgin Media’s split screen showed us Paris Saint-Germain playing Borussia Dortmund in an eerie, echoing empty stadium, on the other there was Liverpool playing Atletico Madrid in a cacophonous, heaving Anfield, less than 400 miles from the French capital as the liver bird flies.

It all felt a little odd, but at Anfield at least it was a case of the show must go on. And, as it proved, it was a helluva show.

“There’s a bigger picture than football,” Graeme Souness conceded, “but we’re here to talk about football.”

Fair enough, so the pandemic was parked – it was Champions League time.

Mind you, the evening got a little odder over on BT with the inclusion in its pre-match pitch panel of Sheamus, the Dubliner who Des Kelly pointed out is “a WWE superstar!”, lest anyone wasn’t entirely sure.

His connection with the contest ahead was not immediately apparent, other than him being a Liverpool fan, and Steve McManaman looked almost as puzzled to have him standing alongside him as the rest of us felt.

Then Des alluded to the fact that BT Sport is the rights holder for that WWE lark, and Sheamus will be WWEing at a Wrestlemania thingie live on BT Sport next month.

But if you think this was just a Sheamless promotion then you’re too cynical for words. Besides, Sheamus had plenty to offer in the pre-match analysis. Eg:

“FOR EVERYONE WATCHING AT HOME IN DUBLIN, DES KELLY THE CARPET MAN RIGHT HERE! HE’S GOT A JOB ON BT SPORT! HOW DO YOU DO IT DES?! HOW DO YOU MANAGE TWO BUSINESSES?!”

Forever more, English Des and Scouser Steve will wonder what on earth he was on about.

Back on Virgin Media, the focus remained firmly on football rather than carpet-selling, the panel swooning over young Erling Haaland’s goal-scoring stats this season, although Niall Quinn noted mournfully that the Dortmund lad was in the middle of a two-game drought.

Still, his future looks rather shiny, although Tommy Martin mentioned that Erling suggested he still isn’t as good as his Da Alf-Inge was in his day, a revelation that had Graeme brow-wrinkling, him seemingly reckoning that even when he was a foetus, Erling was a better footballer than Alf-Inge.

Tommy then suggested that maybe Erling got the bulk of his qualities – mobility, pace and such like – from his mother, who was a heptathlete of some standing.

“As they said in Ireland,” said Niall, “you can’t beat the dam when it comes to the breeding.” It was Graeme’s turn to look bewildered.

Anyway, kick-off time approached, and in light of the times that are in it, ‘KLOPP REFUSES TO SHAKE HANDS WITH YOUNG FANS!’ won’t be a headline in any of your Thursday papers.

Jurgen simply opting to remind said young fans of, well, the times that are in it. Similarly, neither he nor Diego Simeone will be punished for elbowing each other when they met on the touchline.

Off we went and while the overall contest was exceedingly tasty, it was hard not to zoom in on Virgil van Dijk and Diego Costa prowling around each other and wonder how they could belong to the same species.

Diego always on the verge of spontaneously combusting, Virgil yet to break into a sweat in the course of his footballing career. David Attenborough should really have been doing the commentating on the dual.

Half-time approaching, no goals, until the intervention of Georginio Wijnaldum – or “Giiigiiiiiiiiii” as McManaman impartially put it, even though, strictly, it should have been “Giiiiiiiniiiiiiii”. (All you can hope is that Steve never looks up comments on his work after his games on the anti-social media thingie, among those spotted was: “If Vincent van Gogh had been alive when Steve McManaman was commentating, he’d have cut his other ear off.”)

In time we’ll forgive the Virgin Media person who came up with the caption at half-time for Giiiiiiiniiiiiiii’s goal: “Init To Wijnit”.

Extra time approaching but with 92 minutes and 20 seconds on the clock Saul put Atletico through with a peach of header into the top corner. Except it was disallowed.

Extra time it was then, with just enough time before it for Graeme to express his severe dislike for Atletico’s approach to the game of Association Football, the technical term being shithousery, and to express his bewilderment that Liverpool had not already gone through in or around 17-1 on aggregate.

What followed was 30ish minutes of demented delicious drama. As Keith Andrews put it, “YES, FIRMINOOOOOOOOO!!!!”

And then Marcos Llorente scored twice, and Simeone jigged and reeled up the touchline, punching the air until it was concussed. And then Morata added another. Pure and utter madness.

Liverpool out, Atletico walk on. Now we just have to wait and see in what year the quarter-finals will be played.