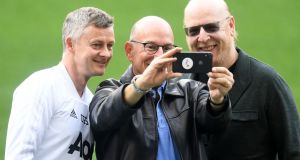 It is, as everyone knows, 20 years since Ole Gunnar Solskjær scored that goal in European football’s biggest stadium and on European football’s biggest night. And, if it has often felt inescapable over the last fortnight, inevitably it was there again when he finally returned two decades later, playing on the screens of the press room as he got up and made his way to the Camp Nou pitch for the first time since 1999, BarçaTV recalling the moment more than the man in the middle of it.

“I don’t know how I will feel when I get there – there will be many emotions and it is a fantastic memory for me of course,” Solskjær said before heading out. He was 26 then; he is 46 now.

“That was the only time I have ever been on the pitch, actually. I came here to the clásico in 2016 with my young son; we bought two tickets and sat high up in the stands. And I came again 10 days ago [to watch Barcelona-Atlético], but that’s it, and I don’t really look back that often. I’ll just focus on tomorrow, on a better performance.”

They will need it, Solskjær admitted. The mystique may be there, and it can provide strength too, the United manager preferring to talk of belief rather than fate, but it can break on reality.

Manchester United have won three of four games away from home, scoring in the last minute at Juventus and at Paris Saint-Germain, and the Barcelona manager Ernesto Valverde talked about United’s “spirit”, noting “they have something special in the final minutes – in fact they won a Champions League here that way”.

But he preferred not to hear destiny calling, and so too did Solskjær.

“We all take examples from the past to motivate us for the future; you can think it can happen again, but in the end I think the destiny has to be written by you, not because it happened again,” Valverde said. “You have to seek it, and we will to seek our destiny tomorrow. I suppose United will do that too.”

United won the treble that night in 1999. Barcelona, the league virtually secure, the Copa del Rey final awaiting them, aspire to a treble of their own. It would be their third, and if they do not achieve that now their season is likely to be judged a disappointment.

If they do not make it into the semi-final for the first time in four years it will be considered a disaster. They lead 1-0 from the first leg, and have not lost a European game at the Camp Nou for 30 matches, going back to 2013. Their record reads: 27 wins, three draws, 93 goals scored, 15 conceded.

And Lionel Messi is back, Valverde confirmed. “He was dazed after [the clash with Chris Smalling at] Old Trafford, but he’s fine now.”

That said, Barcelona have not gone beyond this stage since 2015, falling here three years in a row, and Messi has not scored a quarter-final goal since April 2013, 12 games ago.

“He’s closer to scoring tomorrow then,” Barcelona’s manager shot back. “When you talk about stats a lot, that’s fine and all, but the past doesn’t tell you what will happen in the future.”

Yet here the past seemed to play, ever present albeit as something to escape that neither coach wanted to be trapped by. If United will always have Paris, Solskjær was clear that it is not enough; it was tempting to see a team that has already come further than anyone expected – and may even have come too far. Tempting, too, to wonder if that suggested that rather than making progress inevitable, it made a fall more probable: play like they did in the Parc des Princes and the result won’t be the same.

Asked if he believes in fate, Solskjær responded: “I believe that you get what you deserve in sport, if you put your life, effort and determination into it. Belief is massive. Everyone has talent, a certain ability, but we saw against PSG that we can get back from 2-0 down against a fantastic team.

“Sometimes people say it has to be our year, that it was 20 years ago, that I played with the No 20, that we’re back at the Camp Nou. But to go through we have to deserve it. You can’t just say that it’s fate.”

Instead it’s football. Valverde admitted that the thing he most feared about United was their speed. “If you give them space, they run well, they’re decisive.”

And asked if he expected United to begin on the attack, he replied: “I imagine they’ll try to do something similar to what they did at other grounds.”

Yet Solskjær was clearly aware that this task is greater. He demanded more from his forwards and greater concentration from them all. He also demanded they have the ball: there would be little point parking the bus.

“We [also] didn’t keep the ball as well as we should have at home. We didn’t create enough chances, and you have to do that against Barcelona. You can get some freak results, but that doesn’t normally happen.

“We have to perform better than 80per cent -20per cent; we need to stamp our authority on the game because if you give Suárez, Messi, Coutinho time on the ball, too many chances, you will suffer.”

This will be hard, in other words. “Even harder than Bayern in 1999?” he was asked. That again.

“In football anything can happen, and we know that if we keep a clean sheet we can still be in the tie in the 93rd minute, because we are bigger than them, physically taller, but it is about the quality. We need to defend well, but we also need to score” Solskjær said.