Solskjær urges United to be ‘streetwise’ against Barcelona

Manager insists Paul Pogba will be at Old Trafford next season 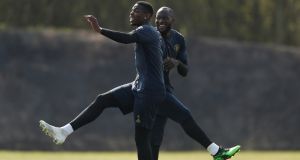 Manchester United’s Paul Pogba and Romelu Lukaku during training before their match against Barcelona. Photograph: Action Images via Reuters/Lee Smith

Ole Gunnar Solskjær has warned Manchester United they will need to be “streetwise” to knock Barcelona out of the Champions League, with the manager hoping lessons will be learned from their first-leg defeat to Paris Saint-Germain in the last 16.

That result was a 2-0 loss at Old Trafford and featured Paul Pogba being sent off in the 89th minute, meaning he was suspended for the return leg. United overturned the defeat in the second leg to progress on away goals but Solskjær wants his side to be cuter against Barça.

Reflecting on a time when his side had 10 victories from his opening 11 games in charge, Solskjær said: “Some of these players will have some tricks up their sleeves, streetwise players. We’ve learned from that PSG game – the mood was a little bit different because they’d won so many games.

“But we’ve learnt from that PSG game. Players have talked about it – how we got dragged into making fouls, how European football is. You’ve got to be more patient in tackles. I can feel the tension, excitement. At training today and yesterday, you can see players wanting to play.”

The Norwegian has backed Pogba, who was wanted by Barcelona when United signed him 2016 but said this week that they could not afford him, to have an important role in this quarter-final tie. Solskjaer said: “It’s not about one player, everyone has to perform at their best level and at Paul’s best he can run a game like this and that’s what you expect from him: that he really puts his stamp on a game like this. Paul’s job is to be the creator, and when we win the ball that he drives forward, so I expect him to perform tomorrow.”

Solskjær reiterated the club’s stance that Pogba will not be leaving in the summer, reports having again linked him with Real Madrid: “He’s a Man United player. He’s one of our big performers and on a big stage. He knows the game against PSG was not his greatest moment. So, he is only focused on playing well tomorrow against Barcelona and I cannot see him not playing for Man United next season either.”

Ernesto Valverde’s team arrive at Old Trafford for Wednesday night’s quarter-final first leg as favourites to progress from the tie yet the United defender Chris Smalling was bullish regarding the prospect of marking Lionel Messi, the five-times Ballon d’Or winner.

“It’s something to relish, I think,” the centre-back said. “This season I’ve been lucky enough to face [Cristiano] Ronaldo, [Kylian] Mbappé and they’re all challenges I think I definitely relish and I think players at this club relish. I say bring it on.”

Solskjær acknowledged Messi’s threat yesterday but stated it was not only him United should be wary of: “What kind of plan can you have to stop one of the best players in the world? He is a fantastic player and he’ll go down in history as one of the best individual players ever. He’ll be difficult to stop but it’s never impossible.

“We can’t just focus on him, we know we have to play 11 against 11. As Chris says, we relish the opportunity, but this season we’ve played against Juventus and Ronaldo, PSG with Mbappé. We’ve had Chelsea and Hazard [in the league]. [Luis] Suárez, [Philippe] Coutinho and Messi will keep our defenders on their toes, so let’s see how we manage tomorrow.”

The manager also has to contemplate the fact that Ashley Young, Nemanja Matic and Luke Shaw will miss the return leg if they are booked but used the example of Roy Keane in the 1999 Champions League semi-final against Juventus to inspire them, the Irishman turning in a man-of-the-match display despite being shown a yellow card that excluded him from the final.

“Roy Keane was best example of how to react if you’re going to be out of the next game,” the manager said. “But then again we know we can’t give fouls away. How many goals has Messi scored from free-kicks just outside the box? Of course we’ve got to be careful.”

Solskjær was a United player when Sir Alex Ferguson’s team drew 3-3 with Barça in both the home away and group games of the 1998-99 competition. “If we get an aggregate score of 6-6 and a penalty shootout at the Nou Camp, I think everyone will be happy,” Solskjær said.

The United manager hopes Marcus Rashford’s ankle will not have an adverse reaction to training with the squad on Tuesday morning and the manager also awaits late fitness tests on Matic and Ander Herrera. The former has more chance of being available but Solskjær confirmed Antonio Valencia and Eric Bailly are definitely out. – Guardian service