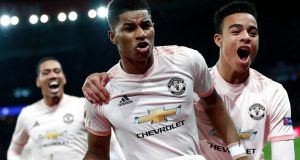 Manchester United’s Marcus Rashford celebrates after scoring a penalty late on in the Champions League round of 16 second leg match against Paris St Germain at the Parc des Princes. Photograph: Ian Langsdon/EPA

Rashford was forced to wait more than four minutes as Damir Skomina, the referee, consulted the touchline screen in a dramatic VAR decision after Diogo Dalot’s shot hit Presnel Kimpembe on 90 minutes. After around two minutes of deliberation Skomina awarded the spot-kick but Rashford then had a further two minutes before he could take it as PSG’s players attempted to distract him.

But when the 21-year-old stepped up he smashed the ball high past Gianluigi Buffon to make it 3-1 on the night and the tie 3-3, sending United through on away goals.

Solskjær said: “There were no nerves, he’s fearless. Him and Romelu Lukaku were fantastic all night. This club, this is what we do. That’s Man United. The referee had a big call to make and he [Kimpembe] made himself bigger so it’s a clear penalty apparently.”

The injured PSG forward Neymar reacted angrily on Instagram. “This is a disgrace, they put 4 people that know nothing about football in charge of looking at the replay for VAR. There is no penalty. How can it be a handball when it hits his back! Go f**k yourselves!”

Yet his manager, Thomas Tuchel, was measured, refusing to blame VAR for his side’s reverse, stating he was not unhappy or angry at the decision.

“No, I think it’s difficult. I think there are reasons why you can give this penalty. When he goes to VAR we know he has reasons. With a handball decision, you have soft facts but not hard facts. The shot is wide, and then suddenly it’s a penalty.

“Okay. I am a big supporter of VAR, and I remain a big supporter of VAR. When Dalot took a shot, I saw the ball flying straight from his foot and it goes way over the bar. I was surprised to see it was a corner because I hadn’t seen that, then he goes to the VAR, so I knew he was going to give it because he had evidence.

“There are too many points in whether we punish it – the distance from the player, does he move his arm. It’s 50-50. Some say no when others say yes, that’s the difficulty with handball. But we played on the thin line for 60 mins knowing this could happen.”

Of Neymar’s comments Tuchel said: “I wouldn’t overinterpret the use of his words. In the heat of the moment, it’s quickly typed into a smartphone.”

For Solskjær this was yet another triumph in his reign as caretaker boss. He made United the first side at the 107th attempt to progress in the knockout stage when losing their home leg 2-0 and this was a ninth consecutive European away win, matching the club record set by Matt Busby’s team in 1956-57.

Solskjær achieved this with 10 frontline players unavailable, doing so with Avram Glazer, United’s co-chairman, in attendance. Yet he refused to be drawn regarding whether he should be appointed now.

“I keep doing this job as best as I can and let’s see where it takes us. It’s been a fantastic time with the players and the staff I’ve got working with me, I’m going to enjoy this job as long as I’ve got it – I’m going to smile,” he said.

Solskjær backed United to claim a fourth European Cup. “Of course we fancy ourselves,” the 46-year-old said. “We can go all the way but we just have to wait for the draw and then take the game as it comes, we’ve had loads of injuries, suspensions but that was maybe a good thing today, we had a fresh team, loads of energy.”

Romelu Lukaku had scored twice with Juan Bernat pulling one back for PSG before Rashford’s intervention. He said: “I was just trying to keep a cool head, those are the sort of things you practice every day. The wait before is the hardest thing.” – Guardian

1 LeBron James among those to slam Drew Brees’ anthem comments
2 How a GAA club sprang up in east Belfast over Sunday breakfast
3 GAA players spend just 2.5 seconds within 2m of each other during play
4 Social distancing takes a back seat as fans return in Hungary
5 Eoin Murchan on being the wrong player in the right place at the right time
Real news has value SUBSCRIBE