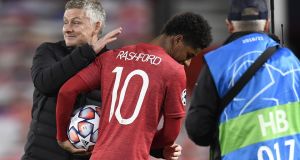 Marcus Rashford came off the bench to score a hat-trick against RB Leipzig. Photograph: EPA

Ole Gunnar Solskjær keeps saying that having too many good players to use all at once is a sign of Manchester United’s standing and ambition, and perhaps by way of proving it he left out Marcus Rashford and Bruno Fernandes against RB Leipzig.

That was quite a big call against an unbeaten side at the top of the Bundesliga. Rashford may have been making most of his headlines off the pitch in recent weeks and Fernandes finding himself a member of a rather crowded selection panel for midfield, but the pair are United’s leading goal scorers this season.

Resting Rashford left United with only Anthony Martial and Mason Greenwood up front, almost a return to a 4-4-2 formation, except that neither of the forward attacking options operated as a central sharp edge in front of goal.

Resting Fernandes allowed Solskjær to give Donny van de Beek some time on the pitch, the former Ajax player’s virtual invisibility in Premier League games having attracted comment and criticism after a £35m transfer, but without the Portugal international’s energy and invention behind the front two, United began looking conservative and oddly unthreatening.

Paul Scholes, working as a pundit and putting his finger on the point as usual, said it looked as though they were playing away from home. True enough, but without the usual 75,000 crowd offering encouragement and partisan fervour, is home advantage even relevant any longer?

Leipzig, by the same token, were supposed to be playing away, yet an empty Old Trafford is hardly the full European experience. Not so much Theatre of Dreams as undercooked cauldron of caution. The snazziest thing by far about the German side was the excessively loud jacket worn by their manager Julian Nagelsmann, a stripy acid-blue number that was practically alone among the visitors in sparkling under the lights.

It might be remembered that José Mourinho first made a name for himself by attracting attention when celebrating a Porto win at this stadium, though even the soon-to-be special one was dressed more demurely in a dark blue coat.

On the pitch, Van de Beek was tidy and efficient without suggesting he deserves a regular slot ahead of Paul Pogba or Nemanja Matic. At least he was kept on when the latter was withdrawn after an hour, but only to appreciate he also faces competition from Fred and Scott McTominay. As Solskjær keeps emphasising, he is not short of options in midfield, and the questions about where Van de Beek would fit in surfaced when he signed, not simply after a few weeks of bench warming.

The consensus in summer was that Van de Beek was a signing for the future, possibly an insurance against Pogba departing at some point, though until Fernandes came on with 20 minutes to go there was no doubt Pogba was the most influential of the home midfield pack.

Greenwood’s finish for the opening goal was characteristically crisp and accurate, but the ball to his feet from Pogba was what cut the visitors’ defence apart. Pogba almost did it again in the second half with an imaginative pass that invited Martial to break his goal drought, only to find his fellow French international could not quite summon a finish to match Greenwood’s.

In all probability one goal would have been enough for United, Leipzig never really looked like getting back on terms even after bringing on a couple of attacking substitutes, but in further bad news for Van de Beek his manager sent on first Fernandes then Rashford for the later stages.

He had only been on the pitch for a few minutes when Fernandes found him with an instinctive pass into space, one that Rashford not only collected but wisely went on to put away, important when VAR overruled the referee’s assistant who failed to spot he was still in his own half when the ball was played.

Within minutes Rashford would again finish impeccably when Fred won the ball just outside the Leipzig area, then magnanimously eschew the chance of a hat-trick by allowing Martial to claim a goal from the penalty spot. No problem – the striker was able to pounce again in stoppage time – proving that not only is he a hero for our times with confidence levels verging on the stratospheric, he can do a decent impersonation of what his manager used to get up to back in the day.

Rashford’s emphatic contribution after entering the fray on 62 minutes suggested Solskjær knew exactly what he was keeping in reserve, and though the United manager has not had everything his own way in the Premier League thus far, in Europe it is impossible to argue with another win in Paris followed by a 5-0 leathering of the form side in the Bundesliga.

Solskjær’s stock is on the rise again, whereas long before the end, Nagelsmann could be seen trying to hide his beacon of a blazer behind the brickwork of the visitors’ dugout. - Guardian