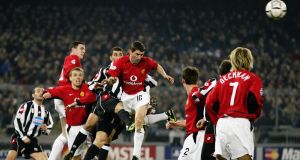 Ole Gunnar Solskjær tried his best to sound confident. He insisted there was “never mission impossible” and, not for the first time recently, he was reminded about that seminal match against Juventus in 1999 and the hard evidence Manchester United did at least have previous when it came to almost implausible feats of escapology in Europe’s premier club competition.

The only problem with that line is that there is a good reason why so many people reminisce about that semi-final in Turin, when Alex Ferguson’s team were putting in place their unprecedented Treble and produced one of the more spectacular performances of his 26 years in charge.

It was the night Dwight Yorke and Andy Cole seemed hellbent on destroying Italian football’s reputation for defensive parsimony. Mostly, it was the performance of a lifetime from Roy Keane, leading Ferguson to say he could never remember a more selfless display from any other footballer.

But the real reason why that triumph at the Stadio delle Alpi still stands out, 20 years on, is that those kind of comeback happen so rarely. It was an almost freakish set of events, culminating in a 3-2 victory after being 2-0 down inside 11 minutes. The exception, rather than the norm, or it would never be so memorable.

That is why if the current side can eliminate Paris Saint-Germain on Wednesday they would deserve to go straight on to the list of United’s great European occasions.

United’s 2-0 defeat at Old Trafford three weeks ago was the only time in their long history of European football, going back to the 1956-57 season under Matt Busby, that they have lost a home game by more than one goal.

Then look through the 63-year history of this competition and calculate how many times a team losing by that score at home have rescued themselves in the return leg. The answer: zero from 106 attempts. It just does not happen.

Not mission impossible, perhaps, but certainly unprecedented. And it is increasingly difficult to see that changing when the plane carrying United’s travelling party, including Ferguson in his directorial and happy-memories role, landed in Paris with so many absentees.

Solskjær has drafted in five academy players – Tahith Chong, Angel Gomes, James Garner, Mason Greenwood and Brandon Williams – and the size of the task is demonstrated by the fact PSG have scored in 23 consecutive Champions League ties.

All the same, Solskjær still sounded like he believed his players could do it.

“We’ll never approach any game as a lost cause. Everyone expects us to go out, and easily, but that doesn’t happen with Man United. Our pride was hurt last time we played them, so we’re going to see players who give their all and if we get nine or 10 playing to the top standard, we have a chance.”

More than anything, Solskjær emphasised the importance of scoring first and how, psychologically, that might affect PSG.

“If there’s half an hour left and only one goal in it, anything can happen. Yes, it’s a technical and tactical game but it’s also a mental game. If we get the first one, we will believe more and they may start doubting themselves.”

All of which is very true – though easier said than done when Solskjær’s recollections of the first leg included “a 10-minute period when they looked like they were going to score every time they had the ball.” PSG have lost only once at home, against Guingamp in the Coupe de la Ligue, since being beaten by Real Madrid at this stage exactly a year ago.

As for the comparisons with that 1999 comeback against a Juventus side featuring Zinedine Zidane, Edgar Davids and a young Antonio Conte, maybe the better reference point is the 3-2 win at Manchester City last season when they were 2-0 down at half-time but saw, close up, how quickly the momentum can change in elite football.

“Everyone knows we have done it,” Solskjær said, referring to the game in Turin, “and the results in the Champions League these last few years . . . I don’t wanna call it strange but last year Juventus lost 3-0 at home to Real Madrid and suddenly were 3-0 up after 90 minutes against Madrid, away.”

A stoppage-time penalty from Cristiano Ronaldo meant Madrid going through but everyone knew the point Solskjær was making and, again, when he pointed out Barcelona had lost 4-0 at Parc des Princes two years ago and then beaten PSG 6-1 in the return leg at Nou Camp.

“We remember those results. There are so many examples of teams who can change results like this. Also, we’ve done it so many times. The players have been fantastic away from home, beating Tottenham, Chelsea and Arsenal, so it gives us belief.” – Guardian