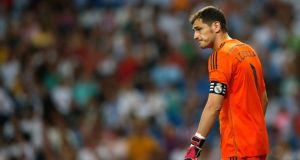 Real Madrid begin the defence of the trophy that appears to have been forgotten after just six games. They waited 12 years to finally win their 10th European Cup. Now, four months on, as they prepare to face Basel in Group B at the Bernabeu, Carlo Ancelotti has described the match as an “opportunity” – not just to begin the pursuit of their 11th, but to “react” and show that there are “good things in this team”.

That he should have to say so is telling. On the other side of Spanish football’s great divide, the Barcelona-based media has begun gloating. “Crisis,” ran the gleeful headline on the front of El Mundo Deportivo. “The best Barça, the worst Madrid,” shouted Sport.

Pressure is building at boardroom level too, exacerbated by the sensation that Madrid’s problems are of their own making. In the summer they signed James Rodriguez, Keylor Navas and Toni Kroos, but they sold Xabi Alonso and Angel di Maria.

In the wake of Alonso’s departure, Madrid were defeated twice in a row, conceding six. Ancelotti yesterday insisted: “I would not swap my squad for any other.”

No team have lost two of their first three games and gone on to win the league since 1974. No one has done so under three points for a win. There is still time but the advantage Barcelona have is significant.

The road to Berlin begins against Basel at the Bernabeu but it feels a long way away now. So, bizarrely, does Lisbon. Guardian Service