Neymar nullified during a glimpse of a Disneyfied dystopia 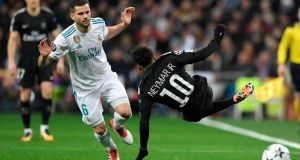 Two super-clubs! The most successful club in European history! The other a club that has just arranged the two most expensive transfers in history! Cristiano Ronaldo v Neymar, the ageing great against the rising star! Skill! Tricks! Flair! Late drama! Rabonas, backheels, dribbles! There was plenty to watch in Real Madrid’s win over Paris Saint-Germain on Wednesday, plenty of story and plenty of spectacle, but there was also a sense of the emperor’s new clothes to the whole affair. The actual football wasn’t very good.

There was plenty of fine individual skill, for sure, plenty that could be cropped and gif-ed, but there was very little in the way of cohesion. This was a film executive’s idea of football, a game that called to mind the fact that Real Madrid’s director general, José Angel Sánchez, has said that the club sees Disney as its model. It was full of screams and dives and needless flourishes, a mess of individuals in desperate need of structure, self-absorbed and self-indulgent.

Every goal was the result of basic defensive laxity. Three of them featured players looking on in weary horror having failed to take basic action to prevent them. The other, the penalty that allowed Madrid back into the game stemmed from Giovani Lo Celso getting into a terrible position and then panicking, pulling back Toni Kroos. The 21-year-old Argentinian was a creator at Rosario Central but has been filling in at the back of midfield for a couple of months since the injury to Thiago Motta while Lassana Diarra recovers match fitness. Perhaps the kindest thing to say is that he found this a significant step up.

But Lo Celso isn’t the reason the best team in France by a mile ended up losing to the side fourth in Spain. Rather he’s a symptom of a much greater problem, something acknowledged by Adrien Rabiot. “It’s all well and good putting eight goals past Dijon,” he said, “but it’s in matches like this that you have to stand up and be counted.” Repeatedly, PSG seemed slightly bewildered by the notion of an opponent who could actually take them on.

After a bright opening, Neymar ran again and again down blind allies, again and again holding possession too long, as though the enormous pressure he is under because of his price tag and because of the expectation on him in this World Cup year – they had brought judging in the Rio carnival forward so it would be done in time for everybody to watch Wednesday’s match – led him to try to win the game single-handed.

He completed 13 dribbles – three more than the rest of his side put together, and more than twice as many as anybody on the Madrid side – but few of them went anywhere useful. He was also caught in possession six times, more than anybody else on either side. Not a single pass was completed between Neymar and Edinson Cavani, a stark indication of PSG’s lack of attacking cogency.

But Madrid were no better – and there was no completed pass between Cristiano Ronaldo and Karim Benzema either. Ronaldo will be praised because players who scored two goals always are, even when one was a penalty and once bounced in off his knee, but his was a weirdly, if not uncharacteristically, self-involved contribution. He touched the ball 30 times and yet had 10 shots, a barely credible ratio. An actual cannon might have been more involved in general play. It’s one thing to praise him for stripping his game down to its essentials, for adapting to the ageing process, but there comes a point at which he is so uninvolved in the game that, even with his remarkable propensity for goals, he becomes a hindrance (even if his ruthlessness offered a nice counterpoint to Neymar’s look-at-me fripperies).

Madrid have kept just one clean sheet in their last 10 games. They suffered similar defensive problems at roughly this time last year as well but got away with it because of their attacking prowess. Perhaps Ronaldo, operating within an ever-decreasing sphere of influence, will hit another purple patch and Madrid will enjoy Champions League redemption after an otherwise miserable season. But the fact remains that Zinedine Zidane sides do not control games but function as a collective of great stars rather than as an interdependent, mutually supportive constellation.

PSG, meanwhile, seem endlessly trapped in some classical tragedy, yearning for European success and then, by spending recklessly on yet more attacking stars, creating in their desperation the very conditions that will guarantee their failure: the more they dominate in France, the softer they will become and the less prepared they will be for the battle in Europe.

But there is also an issue beyond these two teams. This, perhaps, was a glimpse into a future in which elite clubs, focused more on marketing and the generation of revenue than the pursuit of a coherent footballing philosophy, gather together elite players and throw them out onto the pitch to perform without any thought as to whether they can play together. It is, after all, far easier to recognise and exploit celebrity than to tease out the internal harmonies that achieve the multiplicatory effect Arrigo Sacchi demanded of all great teams.

This perhaps is football’s future, a money-obsessed world in which a series of X-Factor auditions has replaced the symphony, our Disneyfied dystopia.