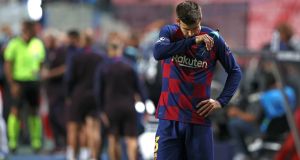 Gerard Piqué admitted that Barcelona are crying out for an injection of fresh blood after their decline was hammered home by Bayern Munich, who reached the semi-finals of the Champions League with a stunning 8-2 victory over the Catalan side in Lisbon.

Barcelona have not won the Champions League since 2015 and, having lost the Spanish title to Real Madrid, their flaws were ruthlessly exposed by Bayern. They were no match for the German champions, who will face Manchester City or Lyon in the last four, and the manner of their defeat leaves huge doubts over Quique Setién’s future as manager.

It is likely that Setién has taken charge of Barcelona for the last time. Yet the problems are not confined to the dugout. Barça have made mistakes in the transfer market – Philippe Coutinho, on loan at Bayern from the Camp Nou, came off the bench to score twice in the dying stages – and Piqué, 33, pointed out that the team has grown old.

“No one is untouchable, least of all me,” the defender said. “Fresh blood is needed. We have hit rock bottom now. We all need to reflect and see what’s best for Barça.”

Setién, who replaced Ernesto Valverde midway through the campaign, refused to discuss his future. “I think that right now it’s too soon to be talking about whether I stay at the club or not. The reality is that it doesn’t depend on me. It’s worth all of us working out what’s important and considering a wide range of things which correspond to a defeat of this importance and which is so painful.

“It’s a tremendously painful defeat. They scored more goals than they merited. We started pretty well but the power of the opponents, in many phases of the play, overran us.”

Bayern, who have already won the Bundesliga and the German Cup, are favourites to win the Champions League for the first time since 2013. However Thomas Müller, who scored twice, called on Hansi Flick’s awesome side to remain humble.

“I think our team is in incredible shape,” the Bayern forward said. “We worked so hard. We work with intensity. It is tough to beat us. We had so much fun today. They have special players and we had to be even more aggressive. There is a moment we catch the ball and we have so much talent in the front line. We feel good after this result. It was very special. But we have to be quiet. We have to regenerate.