French club put almost a decade of underachievement aside 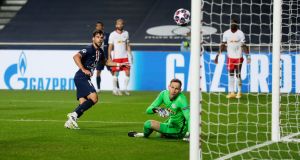 This is what happens when Paris Saint-Germain’s superstars leave their egos at the door, stick to Thomas Tuchel’s plan and play like a proper team. Instead of another choke, serenity fell over the French champions. Neymar and Kylian Mbappé put on a show and there was no hint of any nerves as PSG left behind almost a decade of underachievement, reaching their first ever Champions League final after swatting RB Leipzig aside.

Backed up by an intelligent midfield and a willingness to run, PSG’s vaunted attack proved far too strong for their German opponents. Neymar was outstanding and combined wonderfully with Mbappé. Julian Nagelsmann’s RB Leipzig, formed 11 years ago, had no response and PSG, whose Qatari owners have spent so much since buying the club in 2011, stand one game from joining Europe’s elite at long last.

It was hard not to wonder if PSG were going to blow it again when Neymar produced an astonishing miss in the sixth minute, poking against the post after being played in by a gorgeous pass from Mbappé. After all this is the team that blew a 4-0 lead against Barcelona in the last 16 three years ago, going down 6-1 in the second leg, and lost at the same stage to a heavily weakened Manchester United last season. For all their individual quality, doubts remained over their mentality. They had something to prove; a tag of bottlers to leave behind.

But perhaps the nature of PSG’s dramatic comeback against Atalanta in the last round had acted as a release, shifting the mental baggage. They controlled the game from the start, with Leandro Paredes moving the ball slickly in midfield, and played with impressive maturity in the first half.

All eyes were on Neymar, who did not allow that early miss to weigh him down. The Brazilian did not hide when he fluffed his lines in front of goal against Atalanta and he was dangerous once again, thriving in a free role and combining slickly with Ángel Di María and Mbappé.

After 12 minutes Neymar drew a foul on the left and Di María, back from suspension, lifted the free-kick into the middle. The marking from Leipzig was poor and Marquinhos rose highest, glancing a meaty header home for his second goal in two games.

Leipzig, who had threatened through Christopher Nkunku, looked stunned at conceding such a soft goal. They took a while to clear their heads and might have gone two down when Mbappé, who was in the mood after being passed fit to start, peeled in behind on the right. Peter Gulasci stood up well to divert the striker’s dinked effort behind.

The Germans gradually regained their composure and could have equalised midway through the half. Dani Olmo lifted a pass over the top for Konrad Laimer on the right and when the wing back pulled the ball back, Marcel Sabitzer arrived to fizz a powerful effort just wide of the near post. Sergio Rico, starting in place of the injured Keylor Navas, would not have saved it.

Yet Leipzig, who lost their top scorer when Timo Werner joined Chelsea last month, were too tentative. They invited pressure and were given a taste of their own medicine when PSG, pressing high, punished a dismal attempt from Gulasci to play out from the back. Paredes seized on a loose pass from the Leipzig goalkeeper and fizzed through to Neymar, who produced a moment of instinctive genius, giving Di María a simple finish with a sublime back-heel.

The question was whether PSG would be capable of managing the game. There was no doubt threat they were better than Leipzig but they could not afford to be complacent. RB Leipzig were bound to press after a soporific first half and Nagelsmann made a couple of attacking changes at half-time, bringing on Patrick Schick and Emil Forsberg.

RB Leizpig pressed at the start of the second half, testing PSG’s back four at set pieces. The German side were sharper on the ball and threatened when Forsberg fired over from 20 yards. Fleetingly, a comeback looked possible. PSG looked edgy. But not for long.

PSG simply had too many weapons going forward. There was danger on the counterattack; room to exploit as Leipzig chased a way back. Moments after Gulasci had denied Di María, Nordi Mukiele slipped trying to dribble up the right. Mukiele was still appealing in vain for a foul when the ball came into the RB Leipzig area for Juan Bernat, PSG’s left back, to head past Gulasci.

It was a game too far for the Bundesliga side, who had never reached the knockout stages before. Their gifted 33-year-old coach, Nagelsmann, will be back. He has come a long way since scouting for Tuchel at Augsburg.

Yet it is Tuchel who goes through to face Bayern Munich or Lyon. With Neymar and Mbappé in the mood, anything is possible. – Guardian