Sánchez among the forwards who travelled to Barcelona, having returned after a six-week lay-off with a knee injury 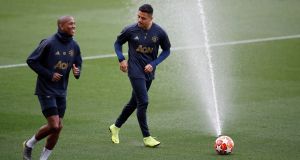 Ole Gunnar Solskjær called on his strikers to step up as Manchester United look to overcome a 1-0 home defeat to beat Barcelona at the Camp Nou and progress to the Champions League semi-finals, describing doubts over who could provide goals as “the $100 million question”.

United need to score at least once at the Camp Nou, with Solskjær insisting that “if it’s a game with a lot of goals in it we have a better chance of going through”.

However, his side registered just a single shot on target in the first leg at Old Trafford, and the manager admitted that while the remarkable comeback at the Parc des Princes has given them belief, they would need to play considerably better in Catalonia.

Solskjær’s response to United’s shortage of goals also suggested that he sees it as a personnel problem, and a costly one to fix.

“We need to score goals,” Solskjær said. “Whether it’s Romelu Lukaku, Marcus Rashford or Jesse Lingard, we need big performances from our forward players. We have to defend well but we have to have that little bit of extra to score goals. I expect them to be ready.”

Alexis Sánchez was among the forwards who travelled to Barcelona, having finally returned after a six week lay-off with a knee injury. Solskjær is not expected to start the Chilean, but he did suggest that this was an opportunity that he needed to take after a disappointing season.It may also be one that helps United seek a buyer for a player who, at almost £500,000 a week, they are keen to offload.

“For him, who has been a player here, it is a big night, and I am sure he will want to prove a point on the pitch,” Solskjær said. “He has been injured and has not had a fantastic season so far, so let’s hope that he can end it well.

“We’re playing games that United used to be in, playing for the top four and the Champions League semi-final: it used to be challenging for the league and the quarter-finals, semi-finals. Let’s hope that when he is on the pitch, he can be happy with his performance.”

Asked why United had passed up so many chances, Solskjær said: “That’s the $100 million question: who can score goals? You create chances but you have to take them: that is why the best strikers are the expensive ones. We have been practising finishing, but it’s also about being focused and confidence. It is about taking a deep breath and taking those chances.”

United have had better results away, seen in victories at Juventus and Paris Saint Germain, and that is something they need to replicate now.

“Maybe teams are more open against us [when they are at home],” Solskjær said. “Maybe they feel they have to try to get the goal, maybe its coincidence, maybe it’s because we got the first goal. We scored against PSG after two minutes and that’s a massive factor.

“Games are decided on mentality and that changed their mentality: they started worrying. It will be the same tomorrow: if we can get the first goal it would be so important. From then on the [aggregate] draw will suit us. Or you look at Juan [Mata] when he scored the free-kick against Juventus. Sometimes it’s quality [that counts], sometimes it’s David [De Gea] at the other end.”

This time, Solskjær suggested, United have a physical advantage, and would field a taller team than Barcelona.

“Of course, if you get set plays, if you have those qualities, you have to use them. But we have to use [crosses] better than last week. We put in many, many, many crosses but Gerard Piqué and Clement Lenglet defended really well, so that might not be the way to break through. We’re playing a fantastic team, and we have to be realistic enough to know that.”