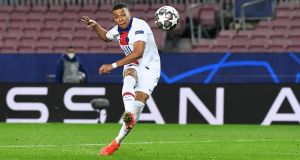 Kylian Mbappe completes his hat-trick in scoring Paris Saint-Germain’s fourth goal in the Champions League round of 16 first-leg match against Barcelona at the Camp Nou. Photograph: David Ramos/Getty Images

There were five minutes left when Kylian Mbappé opened up his body and bent a beautiful shot into the far corner of the net, the ball describing a perfect arch and his perfect night. Marc-André ter Stegen dived but he could not stop the Frenchman, and nor could anyone else.

This was the kind of performance that should have happened before 98,000 people, instead barely three hundred were there to see Mbappé score a hat-trick that led his Paris Saint-Germain side to a huge and deserved 4-1 victory.

By the end, Barcelona were broken, unable to live with their opponents. Leandro Paredes and Marco Verratti took control and, if at some point in the small hours, Barcelona’s players finally get some sleep, they will probably still see Mbappé running at them. He had done so from the very start and he never stopped, until he was walking away with the ball under his arm.

There was no hanging about, Mbappé escaping after just 49 seconds. That time, Ter Stegen set off outside his area and sliced clear but it was a glimpse of what was to come, a warning not to blink. This was fast, open, and fun too – for those without a stake in it. There was a directness, an intent about it all, illustrated early by Moise Kean accelerating past Clément Lenglet. There was tension, a feeling growing that anything could happen at any moment, the threat never subsiding. There were opportunities too.

Pedri’s lovely filtered pass gave one to Antoine Griezmann, stopped by Keylor Navas at his near post. Five minutes later, Mbappé gave one to Mauro Icardi. Clean through, he shot beyond Ter Stegen but there was little pace on the ball and Pedri raced back from inside the centre circle to clear off the line.

In doing so he atoned for having given the ball away in the first place but this was becoming another notable night for a player emerging as something special. Not long after, Verratti made a superb tackle on Griezmann inside the area after Messi had dropped off a neat reversed pass to him.

A lot was happening, and fast. The question was whether they could keep up this rhythm. And then suddenly, just as Barcelona seemed to be trying to slow this down as a matter of survival, there was a penalty. It was a pretty mundane, almost bureaucratic way to open the scoring given all that had gone before and all that would come next.

After all that intent, it was accidental too. Frenkie de Jong tumbled as he chased Messi’s long ball, a trailing leg perhaps brushing Layvin Kurzawa’s knee. Either that, or he had tripped himself. Referee Björn Kuipers immediately pointed to the spot and Messi sent it rocketing beyond Navas.

The response was swift, and superbly taken. Three minutes passed when Verratti flicked into Mbappé with the outside of his boot. With his first touch, Mbappé turned, surged past Lenglet and, inside the six-yard box now, smashed it into the roof of the net.

The storm was Mbappé and it had only just started, Ter Stegen pushing away Kurzawa’s shot a minute later and from Kean three minutes after that. Between those, Griezmann sprinted away from the halfway line, allowed to run all the way to the edge of the area, but he pulled his shot just wide. Then Icardi headed just wide on the stroke of half-time.

There was no stopping now. Mbappé came running out of the tunnel and straight at them, immediately firing just wide; Icardi’s shot was blocked; and Ter Stegen produced a superb save from Kean, after Mbappé’s flight and Icardi’s clever back heel had carved out the chance.

They had not been back out there five minutes yet but it already felt like it might prove a long time for Barcelona, unable to hold back the tide. A brief hold on possession slowed it, and led to a penalty shout too when Kean handled Jordi Alba’s pass, but it did not last long.

Paredes’s wonderful long pass released Alessandro Florenzi into the area. His cut-back was only half-cleared by Gerard Piqué and there to finish it off was Mbappé. Smoothly turning away from Sergiño Dest a moment later, Ter Stegen denied him a hat-trick but PSG were not denied a third, Kean heading in Paredes’s curling delivery at the far post.

If the scoreline was bad enough for Barcelona, you could not help wondering if worse was the fact there were still 20 more minutes of this, the punishment destined to be even more painful, and so it proved.

Navas hit a pass off Griezmann that almost rebounded back into his own net and that was as much as Barcelona, already beaten, had been able to do at one end.

PSG, meanwhile, continued to pour into space everywhere. With ten minutes to go, Ronald Koeman made three changes. But more than an act of faith, it felt like an act of mercy. Piqué, Dest and Pedri had suffered enough. They all had. Mbappé, though, was not finished yet. – Guardian