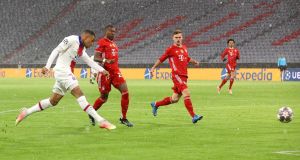 Kylian Mbappé produced a performance of stunning high-end incision to drive Paris Saint-Germain to a 3-2 Champions League quarter-final, first leg victory in Munich. Hansi Flick’s Bayern produced the familiar high-pressing red waves and created a glut of chances that the injured Robert Lewandowski might have taken, but were picked off repeatedly by Mbappé’s movement and some precision passing from Neymar.

The Allianz Arena was drenched in a squall of April snow at kick-off, on a night so cold even the referee wore gloves. But Paris ran hot from the start. With two minutes gone they took the lead, and did so in the most PSG way imaginable, breaking from halfway through Ángel Di María, who released the ball to Neymar, who played the perfect nudged pass to Mbappé.

His shot was hard and low but straight at Manuel Neuer. It bounced off his legs and into the near corner of the net.

And for a while PSG looked like they might score every time they attacked, with Mbappé lurking on the shoulder of the high red line. Both teams had lined up in a 4-2-3-1 but this was still a delicious clash of counterattack and high-pressing blitz as Bayern poured forward at the other end.

Even without Lewandowski and Serge Gnabry, there is a smothering momentum about this Bayern team. Kingsley Coman found space on the right. Keylor Navas produced a wonderful reflex save from Leon Goretzka’s close-range header, then another sprawling block to repel a vicious drive from Josh Kimmich.

The Bayern style works best with a high line, when the defence and midfield compress, but it does tend to leave a very obvious target behind. It’s the game they play, with a conviction that they have the certainty and the personnel to assert their own rhythms. But at times in the first half Neymar was given the freedom of Bavaria.

With 28 minutes gone it was 2-0. The goal was made from the same component parts: another Mbappé surge , which ended in a corner; and another moment of frailty in that bold high line. As the corner was cleared Bayern charged out, Neymar dinked the ball brilliantly back over the advancing red front to find Marquinhos all alone, with time to slide the ball into the corner.

The Allianz Arena is a boisterous place at the best of times, but the silence as the white shirts ran to celebrate felt authentic. Bayern, the champions, had been sliced apart.

Marquinhos left the field almost immediately with what looked like a groin injury, replaced by Ander Herrera. Goretzka exited on 32 minutes, replaced by Alphonso Davies.

And five minutes later Bayern pulled one back through Eric Maxim Choupo-Moting. Kimmich whipped a deep cross into the box, and Choupo-Moting headed powerfully into the corner, a fine finish from a player who, aged 32, has never got past 10 league goals in a season for any of his eight professional teams, but who runs, works, adapts, is always diligent and willing.

By the time the second half kicked off Bayern had also lost Niklas Süle, replaced by Jerome Boateng. And still the game carried on the same way, a wonderfully open, chaotic thing. Somehow Mbappé and Neymar failed to force the ball over the line, having stripped away the Bayern cover. David Alaba had pushed up into midfield and was running the game at the other end.

And on the hour mark Bayern were level with a goal from Thomas Müller, exploring the hidden space in a crowded area to flick Kimmich’s free kick on into the corner of the net. The waves of red-shirted pressure had dragged Bayern back into the tie, at a time when PSG really missed the calming midfield rhythms of Marco Verratti.

Still, though, they retained that lurking razor edge. And Bayern were cut open again. Mbappé veered in from the left, waited for Boateng to lunge then pinged the ball though his legs to make it 3-2.

There was no let up as both teams kept on slugging it out to the end, Bayern pouring forward, the white shirts looking always to break. It was thrilling, dizzy stuff as the blizzard returned. Muller shot past the left-hand post. Alaba shaved the other one. Colin Dabga and the Herrera defended heroically as PSG hung on.