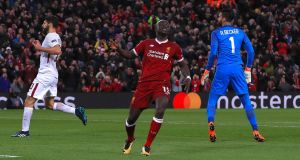 A football match is a million little moments and even looking back afterwards it can be hard to say for sure which ones made the difference.

On Tuesday night at Anfield Liverpool struggled to put two good moments in a row for 20 nervous minutes. Roma were tall, strong and full of self-belief.

Then Roberto Firmino flicked the ball over a defender’s head and passed it to Sadio Mané, who took it in his stride, ran through and blasted his one-on-one opportunity over the bar.

It was a bad miss and Mane’s embarrassment was compounded almost immediately afterwards when he ran onto another good Firmino pass and shanked a shot high and handsome into the stands. Then a chance fell to Mo Salah, whose shot was easily saved by Alisson Becker.

Barely another couple of minutes had passed before Mane seemed to redeem himself by turning a cross into the net, but his celebrations were cut short by an offside flag. Jurgen Klopp raised his hands and clapped to encourage the forward but the grumbles were audible around the ground - Mane’s having a nightmare, this is a shocker.

But while Mane was suffering those three bad moments in a row, something else had happened almost without anyone noticing: it had become a completely different game.

In the space of a couple of minutes Roma had transformed from a team that was confidently bossing the game to one that was horribly aware of their own vulnerability, and the crowd in the stadium sensed it too.

What had caused the shift in feeling? Maybe just that Firmino flick. Maybe it was the offside goal. It didn’t count but in the moment before Roma knew it wouldn’t, they felt that lurching sensation in the pit of the stomach.

Liverpool could feel this shift too but they needed to make one of these chances count. Fortunately they had just the man.

Alisson knew what Mo Salah would try to do when he received the pass from Firmino and took a touch with his left foot. He knew roughly when Salah would shoot and he knew exactly where he would try to put the ball. Everybody did.

The problem is that when someone hits a shot with such precision even one of the best goalkeepers in the world is just another spectator. It was a strike of stunning quality by a player who is - there’s no other way to put it - ablaze with the divine fire. Seldom can a goal have been greeted with such raw amazement in the stands. Save it? It was hard enough just to believe it.

And just before half time Salah had done it again, touching van Dijk’s clearance to Firmino and taking off onto the return pass to beat Alisson with a casual chip - his third such finish in the last two weeks.

Jurgen Klopp’s stock reply when asked to praise Salah is to talk about how fantastic Mane and Firmino are. It’s not so much about trying to rein in Salah’s ego, which does not seem to have kept pace with his reputation, as about recognising the efforts of others.

Salah has had one of the all-time great seasons in the history of English football. But his story shows how contingent every player’s success is on the efforts of others.

Roma’s big signing of last summer was Monchi, maybe Europe’s most-respected football director, the transfer wizard whose signings had been keeping Sevilla competitive far beyond their budget for 15 years. Monchi’s first big decision was to sell Salah for €40 million. The player he was selling was a fast winger with the ability to grab a goal. He was good but, Monchi reasoned, there are plenty such players about.

But the player they were selling was not the one Liverpool ended up buying. And the difference between Roman Salah and scouse Salah has everything to do with who and what surrounds him.

In Rome he was, as the Liverpool song has it, running down the wing, responsible for supplying the box-dwelling centre-forward, Edin Dzeko.

In Liverpool he’s the same guy, with the same strengths and weaknesses. It’s the context that has changed and allowed this amazing metamorphosis to take place. At Liverpool everyone works to get him the ball in shooting positions.

And he in turn makes them better, with his ability to knock a defence off balance in an instant. Klopp has built a system that multiplies the impact of each player. Not every footballer is lucky enough to be part of a team like this in their careers.

Firmino and Salah have played so well this season that both are guaranteed to receive offers to leave Liverpool during the summer. Teams like Real Madrid and Bayern are magnets for every player: playing for them, everyone agrees, is how you prove you have reached the top. But Salah’s experience should show them that in a different environment, they would not be the same players. That doesn’t mean they’d be worse - they might even be better - but they would not be the same. Klopp’s job is to persuade them to stay on and keep being the players they are right now.