José Mourinho says he has no interest in Real Madrid job

United manager linked with job as Lopetegui comes under pressure 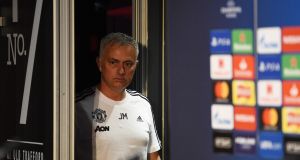 Manchester United manager José Mourinho arrives to give a press conference at Old Trafford ahead of their Champions League clash with Juventus. Photo: Oli Scarff/Getty Images

José Mourinho has denied any interest in taking over at Real Madrid, stating he wishes to stay as Manchester United manager beyond his current contract, which ends in the summer of 2020.

Reports in Spain have claimed Mourinho is seen by Real as a replacement for Julen Lopetegui following the European champions’ disappointing start to the season. They sit seventh in La Liga, four points behind the leaders Barcelona, following Saturday’s 2-1 home defeat to Levante.

Yet asked about potentially becoming Real manager for a second time having managed the club between 2010-2013, Mourinho said: “No. My future is here – I have a contract and until the final of my contract I only think about Manchester United. I am happy to stay here longer than that.”

Speaking in the runup to United’s Champions League Group H encounter with Juventus at Old Trafford on Tuesday, Mourinho explained why his captain, Antonio Valencia, has been left out of recent squads. “The reason was that he was 10 days without training with a problem, not an injury but a problem that he had – a very complicated surgery on his mouth,” the 55-year-old said. “And 10 days without training needed a little bit of time to recover some level after that.”

Valencia trained on Monday morning but is unlikely to start against Juventus. Alongside Marouane Fellaini, Scott McTominay, Phil Jones, Jesse Lingard and Diogo Dalot, Alexis Sánchez is also out of contention for United. “The players you saw [training]are the players that are available, nothing to hide – and Alexis is out,” Mourinho said.

Romelu Lukaku has not scored for United for over a month, with the most recent of the No9’s seven goals this season coming in last month’s 2-1 victory over Watford.

Asked about his goal drought, Lukaku, who did register twice for Belgium 10 days ago, said: “I don’t know [why]. With Belgium I’ve been playing for 10 years, since I was 16. Players know me much more. Here I still think my teamwork between myself and my teammates can improve and be much better. It’s something that we’re working. The players need to know me and know my movement. When that starts clicking I think the results I have with Belgium will also come here.”

Reflecting on the fact United have gallen behind in their past two games, against Newcastle and Chelsea, Lukaku added: “We have a plan every time we go against a team but I don’t know how to explain it. It’s just something we need to get out of the habit of. Offensively we are set up really well but then it’s on the ball where we need to make a difference.”

United are second in Group H, two points behind Juve, who have won their opening two games. Cristiano Ronaldo is poised to make a second return to Old Trafford, following his glittering six-year spell the club.

“He’s a guy who has been consistent for the last 10 years,” said Lukaku of the Portuguese forward. “He’s an example for all the young players coming up.” – Guardian service