José Mourinho back in the European Cup with Tottenham

Spurs will reach knockouts with a win over Olympiakos in London 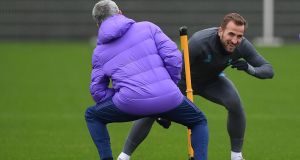 José Mourinho is back in the Champions League, looking forward to Tottenham’s group home game against Olympiakos on Tuesday – win and they are through – and it took him roughly 60 seconds to mention his two triumphs in the competition.

Thirty seconds after that Mourinho dropped in how he had never failed to reach the knockout rounds with any of his clubs and he had a nice line when asked whether Spurs’ run to the final last season amounted to a miracle. It was not the word he would have used, he replied, “Although probably I have done in the past a few times.”

If Mourinho has banged the drum for a new-found humility since replacing Mauricio Pochettino last Wednesday, he remains the master of the humble brag. There was more. It will be his first home game with Spurs – at a stadium he described as the “best in the world” – and his mind went back to some of his previous debut matches.

“The first match of my career as a head coach [with Benfica], I lost and I couldn’t imagine in that moment my career would bring as much success,” Mourinho said. “The two seasons where I won the treble with Porto and Inter [taking in the Champions League], I started with draws. So two bad results and we won everything.”

Mourinho’s memory failed him slightly; his Porto team had kicked off with a win over Braga, while Inter lost to Lazio in the Italian Super Cup. He was on more recent ground when he joked he has a 100 per cent at the Tottenham Stadium, having been the assistant manager of the Inter Legends team for their 5-4 win over a Spurs XI in one of the test events last March.

For Mourinho it is all a part of the look and the process. His confidence, in time, is supposed to become his players’ confidence. Early-tenure Mourinho can be a silver-tongued creature and he made it clear he saw the Olympiakos game as a launchpad.

“I believe that tomorrow can be the restart of the empathy between the supporters and the team,” he said. “With bad results you lose a little bit of that empathy, so let’s hope tomorrow can be the start of it coming back, with good feelings to play at home.

Mourinho’s words have landed with some of their targets. Take Dele Alli, whom the manager told in no uncertain terms that he needed to buck up. He had asked him if he was “Dele or Dele’s brother” and the midfielder, playing in the number 10 role, impressed in the 3-2 win at West Ham on Saturday.

“I laughed – it was actually the first thing he said to me,” Alli said. “To have it honestly said to your face was nice, because a lot of people would prefer to say it behind your back. I can’t make excuses for last season and I am tired of trying. I know it wasn’t good enough. But I have showed my level and the route I’ve taken [from League One at MK Dons] – you have to be mentally strong. I know where I want to go and I know what I want to achieve as a player. Nothing is going to stop me.”

Mourinho spoke about how details and moments can make all the difference, such as when his three best penalty takers at Real Madrid – Cristiano Ronaldo, Kaká and Sergio Ramos – each missed in the 2012 Champions League semi-final shootout defeat by Bayern Munich. “That was the strongest Real Madrid of the past 15 or 20 years,” he said. “We were the best team [in the Champions League]. We didn’t win it.”

Pochettino’s Spurs were on the right side of some fine margins in their run to last season’s Champions League final when, in Mourinho’s words, they almost “landed on the moon”, only to lose to Liverpool. “To arrive in the final is an incredible achievement but it’s not history,” he said. “History is winning.” – Guardian