Liverpool boss insists there’ll be no repeat of subdued display 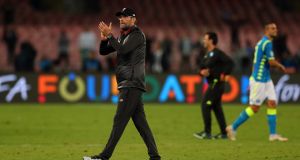 Jürgen Klopp said he was at fault for Liverpool’s surprise defeat by Napoli on a night when his team “did not perform” in the Champions League.

Liverpool were deservedly beaten by Lorenzo Insigne’s 90th-minute goal for Carlo Ancelotti’s side having produced an error-strewn and passive display at Stadio San Paolo. Last season’s finalists also lost Naby Keïta to a back injury in the 19th minute.

The £52.75m midfielder was taken to hospital as a precaution but is expected to travel back to Merseyside with the Liverpool squad on Thursday. “It is his back,” Klopp said. “I don’t know what exactly. We have to wait.”

The Liverpool manager was also in the dark over the reasons for his team’s uncharacteristic performance in the Champions League, which left them level on points with Paris Saint-Germain in Group C.

“The start of the game was OK,” he said. “Then the timing for our defensive movements were not good enough, we didn’t close the spaces in the right moment, we didn’t react in the right situation and so they could play through our formation.

“Things like this happen but not as often as they did tonight and it costs energy. We had to fight really hard. Then when you have the ball you have to play much calmer.

“I have to accept that a big part of that performance was my fault for sure but I need at least one night to watch it again and see exactly what was the fault, but it was not like it should have looked.”

Klopp refused to blame an intense sequence of fixtures for his team’s subdued display and insisted there would be no repeat when Manchester City visit Anfield in the Premier League on Sunday.

“It is absolutely intense since the last international break. We cannot change that so we have to make sure we are ready. You were all full praise of our season and then tonight we didn’t perform. That happens.

“We don’t have to think about intensity. We have three days to recover and then we will face Man City. It would’ve been difficult any way at any time of the season, it is always difficult.

“Let’s have a look how the players are after the game and then we will prepare. Then we have our crowd at our backs. Tonight you could see Napoli used the atmosphere and we couldn’t calm it down but on Sunday it will be 100% different.”