Created with German and Egyptian magic, Liverpool are oddly indigenous 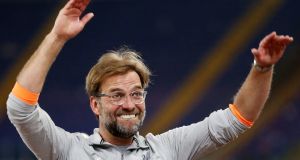 Jürgen Klopp thanks the Liverpool fans after reaching the Champions League final at the Stadio Olimpico, Rome.Photograph: Steven Paston/PA Wire

According to Benjamin Disraeli Rome symbolises the ideal of conquest. Not quite yet, it doesn’t. Liverpool may have earned their moments of unbound joy inside the Stadio Olimpico on Wednesday, capped by a lovely interlude as Jürgen Klopp went bowling through the security lines to exchange a little joyful energy with the Liverpool fans, waving his arms like a drunken dad at Christmas, all goofy warmth and unaffected pleasure in a shared achievement.

But as Klopp pointed out, nothing has been settled. The run to the final has had its memorable subplots. From James Milner’s elevation to the status, on the season’s stats, of most creative player in the history of modern European football. To the sustained excellence of Andy Robertson. To the spectacle of players as diverse as Loris Karius and Ragnar Klavan blocking it out en route to a Champions League final.

Still, no permanent mark has been made and certainly Real Madrid will present a different kind of obstacle. For the first time this season Liverpool face a meeting with European aristocracy. Deep down Real will see them as extras in this show, a disposable piece of ballast, there to provide a backdrop to the imperial parade.

Yet for all that it is perhaps time to park thoughts of Kiev and wallow just a little in the moment, because Klopp is wrong in one sense. Something significant has been achieved. First for Klopp himself; and second for English football, so angst-ridden in its endless search for things such as identity and purpose, for the right DNA, the right borrowed suit of clothes.

Yes: it’s time to talk about Jürgen – and about us. Man is never so manly as when he feels deeply and acts boldly. That was also Disraeli but it could at a pinch be a Klopp-ism, just without the guffaws and the swearing and the slang, a Victorian translation of one of those asides tossed into his rambling late-night press conferences.

Liverpool have been down this road but the boldness, the deep feeling of this team, is Klopp’s own work. This is a manager who has done that rare thing of rebuilding a team entirely in his own image in the space of two years and eight months. Klopp signed eight of the Liverpool players on the pitch in Rome and gave another his professional debut. There is nothing in this team that isn’t basted in his juices. Liverpool lost their best (inherited) player in January and still got better on the back of it – got a new best player, a better best player.

Klopp has always been a systems manager. He remains wedded to his founding revelation at Mainz that the right tactics implemented correctly can beat better players.

This is the other big thing about this Liverpool team in a Champions League final. As Emlyn Hughes once said: “The greatest good you can do for another is not to share your riches but to reveal to him his own.” Actually that was also Disraeli but it captures Klopp’s potential to affect English football more widely.

Real are fitting opponents in this sense. Liverpool’s 4-0 defeat of pre-Ronaldo Madrid in March 2009 is an overlooked staging point in the modern history of European club football. It was after seeing their team physically overpowered by Gerrard and Mascherano, Kuyt and Carragher (and also Babel, Spearing and Dossena) that Real made a slight change of policy, re-gearing to match the power of the Premier League. That summer 13 players left. Cristiano Ronaldo arrived, as did Karim Benzema and Liverpool’s own Xabi Alonso and Álvaro Arbeloa.

That Premier League intensity had revealed something to Real. The hope now is Klopp’s example may do something similar for English football. Like it or not Liverpool are deeply Premier League, oddly indigenous in their style. This is a distinction, not a judgment.

For all the brilliance of Manchester City, the Pep Guardiola system is entirely its own entity – no less or no more valid, but with its own fascinations and contrasts. Whereas Liverpool’s hard-pressing, chancy physicality just feels like a good fit with the strangely persistent texture and tone of the game in this country, the way qualities such as pace and power still emerge even through the prism of Premier League cosmopolitanism.

Perhaps this idea of shared identity should not matter: football is a global, borderless entity now, existing only in that square of green. But the notion of different footballing cultures, of an English way, matters to Klopp, who has spoken in these pages of the benefits of mining that source, of exploring its deep roots. In Rome there were five English players on the pitch at various times and at its most intense the Klopp thrash-metal style just feels like it should be English.

Before the quarter-final Fernandino had called Liverpool a long-ball team, which clearly is not true but does reflect the rather overlooked synergy between the pressing style and classic direct football of the 1950s. Both are designed to provide creativity out of broken play, the kind of attack that can feed like a shoal of piranhas off a state of engineered disorder.

This is what Premier League football looks like, at least in the hopeful imagination. That is has been created by a German, led from the front by a Brazilian and a Senegalese and given a dusting of genius by an Egyptian only adds to the gaiety.

Perhaps Liverpool really will be able to assert their own strengths in Kiev, to summon up the fury of the Red Zone. Some will pore fretfully over the weaknesses in Liverpool’s backline, albeit these are mirrored in Real’s own regally dozy approach to the common mud of marking and tracking back.

One other thing, though: a one-off final suits Liverpool much better than the more unforgiving exam over two legs. Finals can be crazy, adrenal things, there to be wrenched away in a fateful 20-minute surge. Now, who does that remind you of?