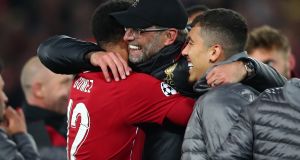 Jürgen Klopp described the greatest comeback in Liverpool’s illustrious European history as a unique and unforgettable night built on the “mentality of giants” as his injury-hit team demolished Barcelona to reach a second successive Champions League final.

Liverpool players were in tears following an incredible 4-0 victory over the Spanish champions, who led 3-0 from the first leg but left Anfield shell-shocked and with questions being asked of Ernesto Valverde’s future as manager. Divock Origi, only starting owing to Mohamed Salah missing the match through concussion,began and finished the rout that secured Liverpool’s remarkable place in the final in Madrid on 1 June. Georginio Wijnaldum, a half-time replacement for the injured Andy Robertson, also scored twice. The midfielder struck in the 54th and 56th minutes – the same times that Steven Gerrard and Vladimir Smicer scored in Istanbul in the 2005 Champions League final. Liverpool had never produced a four-goal comeback in Europe until Tuesday night, however.

“It was really difficult to play against us with a mix of big heart and football skills. That was beautiful. I told the boys before the game it was not really possible but because you have the mentality of giants we have a chance. To produce a performance like that is unbelievable. What they did is so special. I will remember it forever and I don’t know if it will happen again.”

Klopp hailed the “genius” of Trent Alexander-Arnold for the quick-thinking corner that created Origi’s 79th-minute winner and caught every Barcelona player unawares in the penalty area.

“I don’t know what happened,” admitted Valverde, who looked ghostly white in the press conference. “We had prepared for dead-ball situations, because they are so strong in those situations.” His Liverpool counterpart added: “It was a genius moment from Trent. Wow. I saw the ball flying in the net and I didn’t know who took the corner or who scored. Now I saw it back, incredibly clever. I thought our performance was better than 3-0 in Barcelona and tonight probably Barcelona is better than 4-0.”

Klopp gathered his squad and coaching staff together for a massed celebration in front of the Kop after the final whistle. “For me this club is big heart and tonight the heart was pounding like crazy,” he said. “You could feel it all over the world. I am so happy we could give the people this experience. I am really happy having another chance to get things right.”

Klopp admitted defeat to Real Madrid in last season’s Champions League final had left his players with a sense of unfinished business at the start of this campaign. Liverpool’s experience, and this performance, will make them favourites for a sixth European crown when they face either Ajax or Tottenham next month.

“The plan was to go to Madrid and get it in there and now we go there in three weeks time,” he said. “We are really looking forward to that. We want to create our own history, not because we are not happy with the history of the club but because we want a new chapter. I know what people say about me and losing finals but it is the fourth final in my time here and that is really special. Last year we felt we have to go back, we cannot let it stand like this. I am not sure it will happen again it is so special. I saw the boys with tears in their eyes. You feel much more than other clubs in these moments.”

Valverde said Barcelona were “blown away, it is terrible” after suffering a shock exit for the second season running. Last year they were beaten 3-0 in the quarter-final at Roma having won the first leg 4-1. “I do not know how it’s going to affect me,” he added. “The coach has to take responsibility.”

The Barcelona president, Josep Maria Bartomeu, said: “It’s another blow. We had one last year against Roma. For the second year in a row, it’s a disastrous night.” – Guardian