Manager weighs up impressive options for clash with Spartak 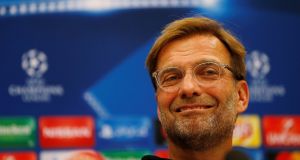 Jürgen Klopp seemed genuinely excited by his first visit to Moscow and the formidable police presence that greeted Liverpool’s arrival at Sheremetyevo Airport. The prospect of finally unleashing his most talented attacking quartet provided another adrenalin rush, but Spartak Moscow away, he cautioned, might not be the place for “all the artists”.

Bans, Barcelona and back injuries have prevented the Liverpool manager fielding Philippe Coutinho, Sadio Mané, Roberto Firmino and Mohamed Salah from the start of a competitive fixture this season. They shared seven minutes on the pitch in the opening Champions League draw with Sevilla but not since the defeat of Bayern Munich in the Audi Cup on August 1st has the fluid foursome opened a contest for Klopp. That may change at the Otkritie Arena, home of the struggling champions of Russia, although there was a pragmatism to the Liverpool manager as he considered his impressive options for the second game in Group E.

“We are an offensive-orientated team but this is about Champions League football – we need results,” Klopp said, moments after his arrival in the Russian capital. “The balance has to be right. It is not about being spectacular, it is about being good and being clinical and having perfect timing and perfect protection. We cannot just bring all the artists but if it fits together we will do it.

“I am excited. We have all of the boys here. We trained this morning, only a little bit, and hopefully we can train tomorrow. It is good to have them all, it is cool. It feels good but I don’t believe in names. I believe in performances. They all have to fit together and that is what we have to try.”

Mané should have no problem rediscovering his rhythm after serving a three-match ban for his dismissal at Manchester City, Klopp argued, having only been given a day and a half off from training during his suspension. “There is no issue with him starting, he is desperate to play,” Klopp said, without confirming if the Senegal international or anyone else would. That brief, devastating performance against Bayern, however, even taking the nature of a pre-season friendly into account, whetted the appetite for what Liverpool’s front four could produce this season.

Klopp said: “Bayern were the better side until we scored and then the game changed. A lot of things were good and obviously they felt really fresh. That was quite a good game but it was eight weeks ago. I knew when we left Liverpool today that it is cool we have everyone for this game.”

One player assured of a starting role is Loris Karius, the goalkeeper having taken Champions League duties from Simon Mignolet against Sevilla and determined to press his claims for more after a difficult introduction.

“I didn’t have an easy start last season,” the former Mainz goalkeeper admitted. “I had a couple of setbacks but now I feel good. I am ready to play in this competition, ready to put in good performances. I do see it as a chance to eventually get back into the Premier League as well.

“I don’t want to put what happened [last season] on certain people. I think it was more an injury at the beginning. I wasn’t 100 per cent ready when I came back from my injury and maybe it was a bit too early. I was new to the club and I was ready to go straight away but as a team we didn’t play well for a couple of games and on top of that I had two bad performances. Then all that comes together. I didn’t expect it to echo that much but it happens.”

The pressure before the fixture tonight is firmly on Spartak’s coach, Massimo Carrera. The Italian led Spartak to their first league title since 2001 last season, his first campaign in charge, but three wins from 11 league games this term and a succession of injury problems have damaged his standing in Moscow. Not that Liverpool’s recent history in the Champions League bodes well for Klopp, either. Liverpool have won only three of their last 13 Champions League games and have not won away since beating Debrecen in 2009.

“Records like that are a problem when people remember them. It is a number, nothing else,” Klopp said. “We are not the same team, only the same name. We had to start new, that is clear, but we are ready for the Champions League. It is exciting. It is a bit like international football, an adventure – you land, it’s dark, never been in Moscow before, you see all the policeman and all that stuff. Not possible to train tonight because of the distance. It’s really exciting and it keeps you really awake. That’s good.”